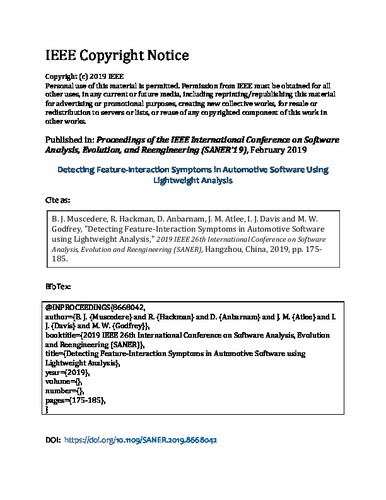 Modern automotive software systems are large, com- plex, and feature rich; they can contain over 100 million lines of code, comprising hundreds of features distributed across multiple electronic control units (ECUs), all operating in parallel and communicating over a CAN bus. Because they are safety-critical systems, the problem of possible Feature Interactions (FIs) must be addressed seriously; however, traditional detection approaches using dynamic analyses are unlikely to scale to the size of these systems. We are investigating an approach that detects static source-code patterns that are symptomatic of FIs. The tools report Feature-Interaction warnings, which can be investigated further by engineers to determine if they represent true FIs and if those FIs are problematic. In this paper, we present our preliminary toolchain for FI detection. First, we extract a collection of static “facts” from the source code, such as function calls, variable assignments, and messages between features. Next, we perform relational algebra transformations on this factbase to infer additional “facts” that represent more complicated design information about the code, such as potential information flows and data dependencies; then, the full collection of “facts” is matched against a curated set of patterns for FI symptoms. We present a set of five patterns for FIs in automotive software as well a case study in which we applied our tools to the Autonomoose autonomous-driving software, developed at the University of Waterloo. Our approach identified 1,444 possible FIs in this codebase, of which 10% were classified as being probable interactions worthy of further investigation.