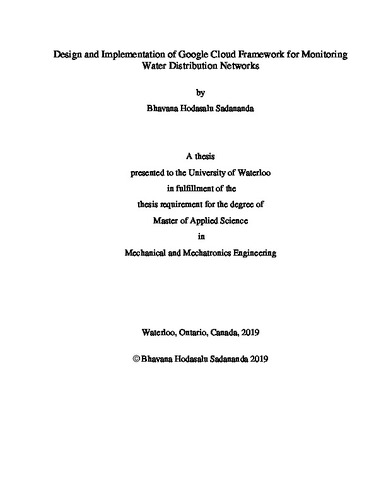 With urbanization and growing human population, water demand is constantly on the rise. Due to limited water resources, providing access to fresh potable water to the rising needs is challenging. Water distribution systems are the main arteries that supply fresh water to all the house-holds, offices and industries. Various factors such as excessive water pressure, aging or environmental disturbances, e.g., from road traffic, can all contribute to damage of water distribution pipelines and can result in leaks in water distribution networks (WDN). This could in turn result in financial loss and could pose additional challenges in providing potable water to the entire community, sometimes even leading to contaminant intrusion. Traditional leak detection methods such as visual inspections can detect leaks; however, this method is reactive in nature and can result in potentially losing large amounts of water before intervention strategies can be employed. On the other hand, hardware-based inspection techniques can accurately detect leaks, but are labor intensive, time consuming, expensive and effective only for short distances. Some existing software techniques are less expensive; however, their effectiveness depends on the accuracy of data collected and operating conditions. Modern existing leak detection techniques based on Internet of Things (IoT)—consisting of data collection sensor sub system, internet connectivity and a decision making sub system—alleviate many issues associated with hardware and software methods, however they are considered to scale poorly and face security issues, fault tolerance issues, inter-operability issues, insufficient storage and processing abilities to store and process large quantities of real time data captured by the sensor sub systems. As a potential solution to these issues, this thesis deals with the application of a cloud-based leak detection system within the overarching concept of IoT. A detailed design and implementation of Google Cloud Platform (GCP) which can provide scalable, secure data processing system to analyze both real-time and batch data collected from IoT devices monitoring a WDN is presented. To circumvent the issue of access to a live WDN, the proposed system uses emulators, python Hyper Text Transport Protocol (HTTP) client running on a computer and a python HTTP client running on an IoT device (Raspberry Pi 3) to simulate live streams of acoustic pressure data from hydrophone sensors. Since the data itself was collected from a live WDN, the decision-making subsystem mimics results expected from live WDN data. The data ingestion layer on GCP incorporates two types of authentication: OAuth2.0 authentication and Application Program Interface (API) key authentication along with other GCP components using service account features to ensure end-to-end secure data processing. Decision support sub-system includes simple, yet powerful algorithm, namely the one class support vector machine (OCSVM) with non-linear radial basis function (RBF) kernel. It is shown in this thesis that GCP provides a scalable and fault tolerant infrastructure at every stage of data life cycle such as data ingestion, storage, processing and results visualization. The implementation in this thesis demonstrates the applicability of the leak detection IoT framework and the concept of a cloud based IoT solution for leak detection in WDN, which is the first demonstration of its kind to the author’s knowledge.