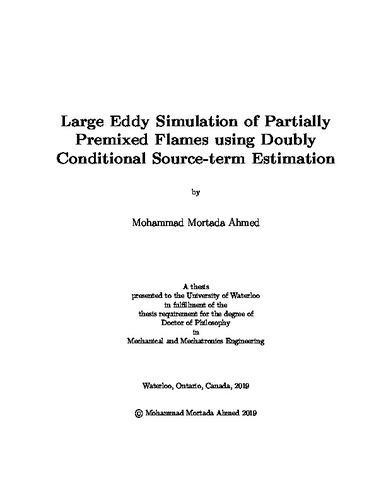 Doubly Conditional Source-term Estimation (DCSE) is a partially premixed formulated closure to model turbulent combustion. The conditioning variables are selected to be mixture fraction and progress variable to represent the non-premixed and premixed flame characteristics, respectively. The statistical distribution of mixture fraction and progress variable is described by a β-Probability Density Function (PDF) and Modified Laminar Flame (MLF-PDF), respectively. In the current study, DCSE is extended to the LES framework to provide further details about the mixing field. In LES, challenging transient phenomena that include lift-off, local extinction and reignition can be assessed. Filtered transport equations of mass, momentum, enthalpy and species mass fractions are solved. In addition, transport equations for the filtered mixture fraction and progress variable, and their Sub-grid Scale (SGS) variance are solved to provide the statistical description of both conditioning variables. Detailed Chemistry is included in the investigation by using GRI-MECH 2.11 and 3.0. To reduce the computational cost, reaction rates are tabulated prior to the LES-DCSE calculations as a function of mixture fraction, CO2 and H2O mass fractions. A least square numerical technique, LSQR, and a more detailed closure for the progress variable Scalar Dissipation Rate (SDR) are initially assessed using RANS-DCSE, which show better performance for LSQR as it reduces the matrix inversion time included in the DCSE implementation by 60%. The SDR model is shown to have an impact on the predictions. LES-DCSE is applied on a series of methane turbulent lifted flames. The predictions show very good agreement with the experimental data, and the qualitative analysis is consistent with triple flame characteristics. A series of methane-piloted partially premixed flames is investigated in LES by using DCSE. LES-DCSE is able to capture the local extinction and reignition with which these flames are characterized. A very good agreement with experimental data is found in the predictions that include radial profiles of Favre-filtered velocity, temperature, mixture fraction and major and minor species mass fractions. These results demonstrate the capability of LES-DCSE of modelling partially premixed flames. Future work includes DCSE implementation in complex industrial burners, examining DCSE in spray combustion and improving the chemistry tabulation technique to be able to investigate complex fuels such as oxy-fuels and syngas.