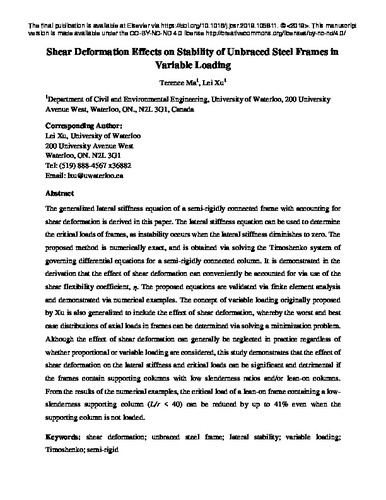 The generalized lateral stiffness equation of a semi-rigidly connected frame with accounting for shear deformation is derived in this paper. The lateral stiffness equation can be used to determine the critical loads of frames, as instability occurs when the lateral stiffness diminishes to zero. The proposed method is numerically exact, and is obtained via solving the Timoshenko system of governing differential equations for a semi-rigidly connected column. It is demonstrated in the derivation that the effect of shear deformation can conveniently be accounted for via use of the shear flexibility coefficient, η. The proposed equations are validated via finite element analysis and demonstrated via numerical examples. The concept of variable loading originally proposed by Xu is also generalized to include the effect of shear deformation, whereby the worst and best case distributions of axial loads in frames can be determined via solving a minimization problem. Although the effect of shear deformation can generally be neglected in practice regardless of whether proportional or variable loading are considered, this study demonstrates that the effect of shear deformation on the lateral stiffness and critical loads can be significant and detrimental if the frames contain supporting columns with low slenderness ratios and/or lean-on columns. From the results of the numerical examples, the critical load of a lean-on frame containing a low-slenderness supporting column (L/r < 40) can be reduced by up to 41% even when the supporting column is not loaded.