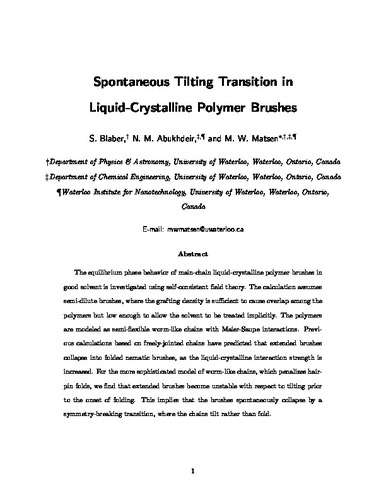 The equilibrium phase behavior of main-chain liquid-crystalline polymer brushes in good solvent is investigated using self-consistent field theory. The calculation assumes semi-dilute brushes, where the grafting density is sufficient to cause overlap among the polymers but low enough to allow the solvent to be treated implicitly. The polymers are modeled as semi-flexible worm-like chains with Maier-Saupe interactions. Previous calculations based on freely-jointed chains have predicted that extended brushes collapse into folded nematic brushes, as the liquid-crystalline interaction strength is increased. For the more sophisticated model of worm-like chains, which penalizes hairpin folds, we find that extended brushes become unstable with respect to tilting prior to the onset of folding. This implies that the brushes spontaneously collapse by a symmetry-breaking transition, where the chains tilt rather than fold.