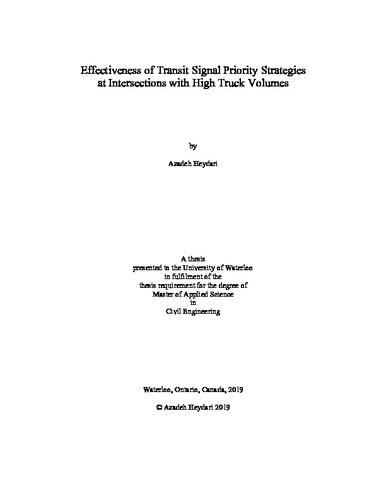 This thesis discusses the effectiveness of two Transit Signal Priority (TSP) strategies, Queue Jump Lane combined with Advanced Transit Signal (QJL-TS) and Green Extension (GE), at an isolated intersection during near-saturated and over-saturated traffic conditions. Each of these scenarios were tested under various conditions using a mix of variables including bus headways of 5, 10, and 15 minutes as well as truck composition consisting of 5%, 10%, 15%, and 20% heavy trucks. The study also considers the location of bus stops by analyzing both near side and far side stops. The analysis is undertaken using Synchro software to determine optimal signal timing plans and PTV-VISSIM software to analyze average vehicle delay at the intersection. The study concluded that higher truck percentage leads to higher delay experienced by all vehicles at the intersection. It was also observed that vehicles experienced a higher delay during over-saturated conditions as expected. It was also noted that for both the near-saturated and over-saturated traffic conditions, GE provides higher benefit compared to QJL-TS, with the highest benefit observed in the scenarios with lower truck percentages traffic composition, i.e. 5% truck percentage.