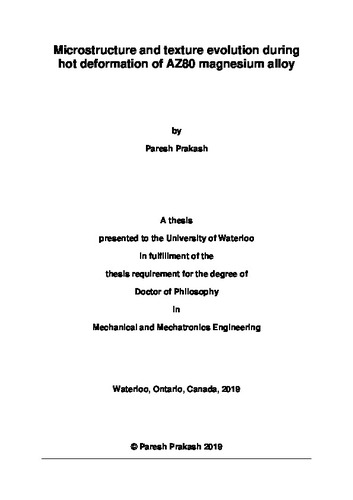 The research investigates the hot deformation behaviour of the AZ80 alloy, with special emphasis on obtaining the flow stress data for a variety of deformation conditions (in range of 300 – 450 °C, and 0.001/s to 1/s) based on uniaxial compression tests, and studying how the microstructure and texture of the material evolve with deformation temperature, strain rate and strain (upto a true strain of 1.0). Particular emphasis was placed on investigating the various mechanisms by which dynamic recrystallization (DRX) takes place in the material for different deformation conditions, and its effect on the texture of the DRXed grains. Detailed material characterization for this was performed using optical and SEM microscopy, EBSD microtexture analysis, XRD macrotexture analysis, SEM-EDX chemical analysis, and XRD phase identification analysis. Successful compression tests could be done for most of the deformation conditions, and the obtained flow stress data was found to be comparable to those reported in literature on similar alloys. Both microstructure evolution and texture evolution were found to be very sensitive to the processing conditions (temperature and strain rate) and the starting material conditions (processing history of the raw material, its texture, and its precipitate content, distribution and morphology). Deformation at 300 °C resulted in an extensive occurrence of DRX through the particle stimulated nucleation (PSN) mechanism at Mg17Al12 lamellar precipitates, and the resulting DRXed grains were oriented randomly with respect to the nearby non-recrystallized grains. For deformation at 400 °C, Mg17Al12 precipitates dissolved away in the material (owing to their thermodynamic instability at this temperature), and DRX mainly took place by the grain boundary bulging mechanism, while the DRXed grains were found to preserve the deformation texture. DRX grain size and fraction reduced for deformation at lower temperatures and/or higher strain rates. DRX grain size was found to be independent of deformation strain level, or the grain size of the starting material used. Cast material showed propensity to crack at surface at higher strain rates (for deformation at 400 °C) which was linked to presence of tensile hoop stresses at the side surface of the samples undergoing uniaxial compression, which will open up any existing/developed microcracks, while localized melting of eutectic Mg17Al12 phase is expected to have contributed to some of these microcracks. Extruded material deformed more homogenously compared to the cast material, owing to its finer initial grain size, and a more rapid occurrence of DRX in it. Despite the differences in the starting microstructures and grain sizes, deformation and DRX resulted in development of similar grain sizes in cast and extruded samples during compression at 400 °C (at various strain rates), which was also reflected in the convergence of the flow stress curves for these materials at true strains above ~ 0.6. The effect to starting texture mainly manifested in form of material flow anisotropy, whereby presence of asymmetric texture components in the starting material (about the loading axis) were found to result in a preferential flow of the material along certain directions during deformation. Also, based on academic interest, hot deformation behaviour of cast AZ80 alloy was compared to that of the most studied member of the AZ family: AZ alloy. It was found that the DRX fraction and grain size are higher in the AZ80 alloy for deformation under the same conditions (the study was limited to deformation at 400 °C). Another interesting result was in terms of the texture of the DRXed grains, whereby it was found that DRXed grains in case of AZ31 were randomly oriented, while in case of AZ80 preserved the deformation temperature.