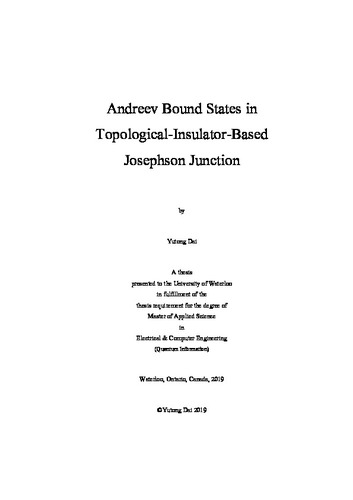 The discovering and manipulating of Majorana fermions have been the frontier of condensed matter physics, not only because it is the first realization of Majorana’s theoretical prediction, but also because of its promising application for topological quantum computation. Several ingenious setups are proposed to provide potential platforms for the detection of Majorana fermions. Among them, the topological insulator (TI) based Josephson junctions has drawn appreciable attentions, considering its advantages to realize large-scale Majorana networks. The study of this thesis explored the relation between Majorana modes and Andreev bound states in a Josephson junction, by calculating and simulating the energy-phase diagram of Andreev bound states. We demonstrated that although the proximity effect is necessary for engineering Majorana modes, too strong proximity effect in a Josephson junction will open a paring gap inside the middle layer and destroy the chiral Majorana modes. The experimental confirmation of this circumstance was also discussed. In addition, this thesis also described the experimental approach of fabricating lateral Josephson junctions, including molecular beam epitaxy processing (MBE) and nanofabrication processing. To optimize the quality of TI film, the deposition conditions and elementary ratios were investigated by Rheed, XRD and XPS. By depositing superconductive Nb layer on topological insulator and proceeding to nanofabrication, we also achieved the lateral TI based Josephson junctions. The fabrication details were also presented.