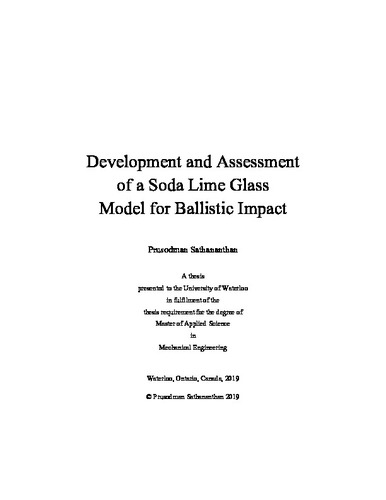 Transparent armour (more commonly known as bullet-resistant glass) is used in armoured land vehicles to provide increased visibility while maintaining adequate levels of protection for the occupants. Soda-lime glass is commonly used in transparent armour due to the ease of manufacture and relatively low cost. Computational impact models of soda-lime glass can be used to aid in the development and optimization of transparent armour systems, but require experimental data to provide input parameters and must be assessed against independent impact data for model validation. In this study, a robust computation model of soda-lime glass was developed and successfully validated against a wide range of experimental data from coupon level dynamic tensile testing to full-scale ballistic impact experiments. To support the development and validation of the computational model, three experimental tests were conducted: a dynamic diametral compression test to measure the tensile strength of the soda lime glass; a sphere ballistic impact test on glass tiles to characterize the dynamic failure of soda-lime glass over a range of impact velocities; and a depth of penetration test to validate the ballistic performance of the soda-lime glass model. Three discretization methods commonly used to model impact problems were investigated including smooth particle hydrodynamics (SPH), element free Galerkin (EFG) and the finite element method (FEM). A first set of models were used to assess common numerical modelling techniques using the sphere on glass tile impact tests and material parameters from the literature. The Johnson Holmquist (JH-2) ceramic constitutive model, accounting for strength dependence on pressure and material damage, was used to model the response and failure of the glass. The SPH method predicted projectile residual velocities with some success (difference in residual velocities as low as 15% at lower impact speeds) but had poor convergence tendencies (p = 1.1). The EFG method demonstrated higher rates of convergence (p = 2.1) but did not predict residual velocities well (differences as high as 348% using literature parameters). Lastly, the FEM showed acceptable convergence tendencies (p = 1.88). Although other solution methods predicted ballistic performance more accurately using literature parameters, the methods were prone to numerical error (SPH) or computationally expensive (EFG) to use effectively. The FEM with failure treated using erosion provided a good balance between simulation accuracy and runtimes, provided that a sufficiently fine mesh, 0.5 mm in this study, was used. In a second set of simulations, the material parameters for the JH-2 constitutive model were determined by fitting strength curves to experimental data and improved using sphere on glass impact test data. It was determined that the fractured strength of the material (B) had a significant effect on the residual velocities of the sphere on glass impact simulations, and the damage coefficient (D1) had an effect on the mode of failure predicted. There was some interaction between the fractured strength (B) and damage coefficient (D1) on the projectile velocities, so B and D1 were determined such that they minimized the error in the residual velocity prediction in the sphere on glass tests. The performance of the updated FEM JH-2 material model was assessed using three sets of experimental data: dynamic Brazilian test, sphere on glass tile test, and preliminary assessment using depth of penetration (DOP) tests. The proposed new material parameters in the JH-2 constitutive model predicted the failure strain and mode of failure in diametral compression samples, within the range of experimental results, demonstrating the ability to predict complex tensile failure of soda-lime glass. Although the model parameters were determined in part using the projectile kinematics of the sphere on glass tile dataset, the measured damage progression and damage propagation velocities in the tiles were used separately for partial model validation. The FEM model with updated JH-2 parameters predicted the projectile penetration in the DOP tests with a 12% difference on average. The predicted difference was as low as 6% at higher impact velocities (930 m/s), and as high 95% associated with lower impact velocities and cases where the experimental projectile path veered off-axis relative to the target. The model used quarter symmetry and did not account for this aspect of projectile motion. This was considered a preliminary assessment since variable such as friction and the projectile material properties require further investigation. The FEM and JH-2 constitutive model with updated material properties predicted a wide range of soda-lime glass impact behaviour demonstrating improved response over a range of load cases.