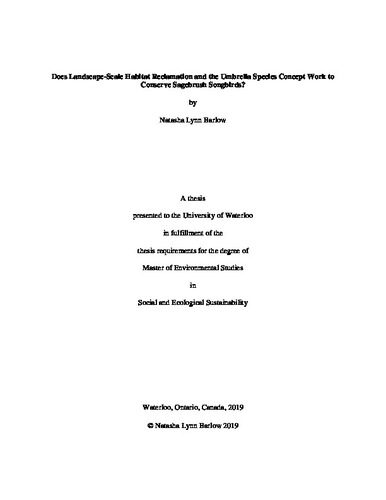 Declines in the spatial extent of the sagebrush ecosystem have prompted the use of conservation strategies including habitat reclamation and the consideration of the greater sage- grouse (Centrocercus urophasianus; hereafter “sage-grouse”) as an umbrella species. However, the response of wildlife to reclamation in sagebrush ecosystems remains largely undocumented, and recent literature has questioned the efficacy of using the sage-grouse as an umbrella species at finer spatial scales. In North America, grassland and shrubland songbird populations are declining faster than other avian groups. I measured avian species abundance (n = 8 species) in sagebrush habitats across a gradient of development: 1) active oil and gas, 2) a landscape-scale reclamation area, and 3) within an undisturbed control-site containing no energy development. Additionally, I quantified nest-site selection for a sagebrush-obligate songbird, the Brewer’s sparrow (Spizella breweri), and then compared the fine-scale habitat variables that influenced Brewer’s sparrow nest-site selection with fine-scale nest-site selection for sage-grouse. I used a Bayesian hierarchical approach to determine the influence of treatment (reclaimed, active, and control), and habitat variables on songbird abundance (2016-2018). Nest-site selection was modelled using conditional logistic regression for Brewer’s sparrow (2016-2017), and logistic regression for sage-grouse (2004-2007). I found that sagebrush songbird species responses to energy development and reclamation is variable, and I did not observe the expected outcome of increasing abundance with decreasing human disturbance (active to reclaimed to control) in any species. Reclamation efforts seemed to produce a measurable influence on some species abundance, although the habitat variables that best represent where we can most easily target reclamation efforts had minimal influence on most species abundance. Most of the conservation objectives for protection of sage-grouse habitats appear to be beneficial or inconsequential for Brewer’s sparrow. Local habitat management for sage-grouse as a proxy for conservation of other species may be justified, if the microhabitat preferences of the species under the umbrella are well understood to avoid unintentional negative impacts.