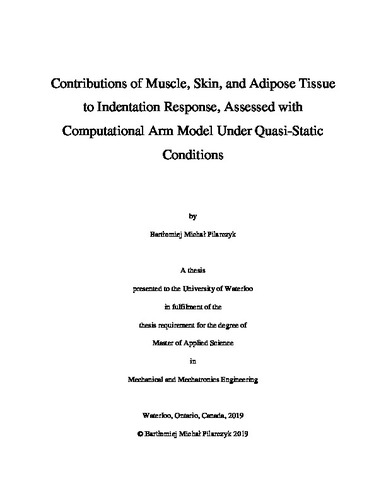 Computational Human Body Models (HBMs) enable the assessment of human response in potentially injurious impact scenarios; however, to do so HBMs require biofidelic material representations to predict the potential for injury risk. HBMs are recently seeing a widespread application in modelling vehicle occupant response for car crash scenarios. Although the soft tissue deformations in these scenarios occur at high deformation rates, a biofidelic model requires quasi static properties of the tissues prior to the incorporation of deformation rate effects. Specifically, soft tissues such as skeletal muscle, adipose tissue, and skin play an important role in impact response including supporting and protecting the internal organs. At present, the mechanical responses of muscle, skin, and adipose tissue are measured using excised tissue experiments and assessed at the individual tissue level, providing a valuable source of information on the behaviour of a particular tissue. Current computational models use these experimental results to define individual tissue response. However, the literature review revealed that there is a paucity of experimental and numerical studies assessing the cooperation of the soft tissues and their joint contribution to a loading scenario. The current study addresses this paucity by creating a Simplified Arm Model (SAM) comprising skeletal muscle, adipose tissue, and skin assessed using a quasi static upper arm indentation test. In this study, material properties for the skeletal muscle, adipose tissue, and skin were collected from individual experimental tissue tests reported in the literature. This data set was called New Soft Tissues (NST), and the properties were implemented in the SAM. Finally, the arm model was assessed using a quasi static indentation test and the predicted force displacement response was compared to a published human volunteer data set. The model predicted the response of the upper arm to the indentation in agreement with the shape and the magnitude of the experimental data. The work performed by the indenter differed by 2% to 65% from the experimental response. To address the variability within the human population, a series of parametric studies were performed assessing: skin thickness, skin age, and the circumference of the arm. The response of the SAM to indentation was close to the experimental average and demonstrated sensitivity to arm diameter. Moreover, the current study showed that the main contributor to the indentation response was the compressive properties of the muscle tissue followed by the adipose tissue, and to a lesser extent the skin. Future research should consider deformation rate effects and the importance of muscle activation on response.