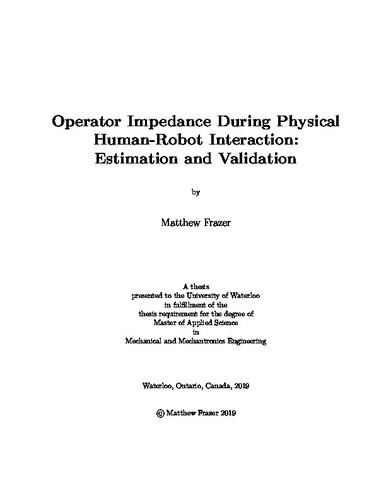 As the frequency and complexity of physical human-robot interaction (pHRI) increases, so does the need to understand the dynamics of this coupled system in real-time. For haptic displays, which provide information to our senses of touch and proprioception, information regarding the human impedance and intent can drastically improve transparency while maintaining operator safety. Numerous online impedance estimators have been proposed in the literature which make continuous approximations of the coupled dynamics available online, obviating the need for perturbations or cumbersome sensors. However, character- izing and validating the performance of these estimators for pHRI is challenging, since it requires precise knowledge of known, time-varying reference impedances. This thesis explores the characterization of online impedance estimators using two serial manipulators (known as the BURT system), coupled at their end effectors, to physically simulate pHRI. One acts as the human, displaying a reference impedance relative to a desired trajectory, while the other runs the estimation algorithm and tracks a perturbing trajectory. Several least-squared impedance estimation strategies from the literature are validated on the experimental setup, demonstrating its efficacy and utility. The importance of accounting for the desired human trajectory is highlighted, and future research to apply results from the field of human motor control is proposed. A bimanual circle-drawing sensorimotor experiment was also conducted with the BURT systsem. Visual feedback on the task performance was withdrawn from one hand at a time and relationships between subject handedness, visual feedback, tracing speed, and circu- larity were studied. Results show that the non-dominant hand tends to trace less circular trajectories than the dominant hand while both are visible, but inconsistent differences in circularity are present across participants when comparing the performance of each hand in its invisible condition. Both hands showed higher tracing speed when only a single hand was receiving visual feedback, and traced more slowly in the free visual condition.