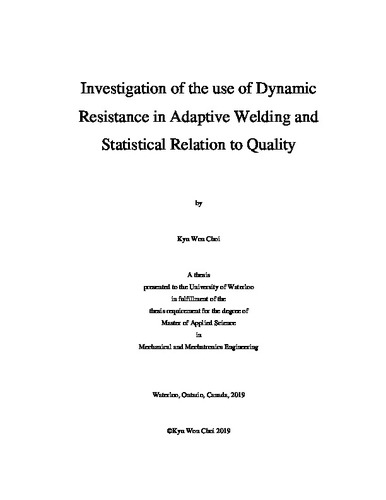 The pursuit of real time quality detection of a resistance spot weld (RSW) in the automotive industry has progressed alongside technology. With the capability of modern controllers to collect real-time data from the welding procedure on a millisecond scale, the use of the dynamic resistance curves has become feasible. The controller used in this study was a Bosch Rexroth PSI63C0.120L1 with adaptive welding capabilities. The adaptive welding method used by Bosch is based on a reference dynamic resistance curve upon which the controller bases all of the adjustments to the welding current and/or time. In this study the dynamic resistance curves of a simple 2 high stack up of USIBOR® was welded under possible unideal process conditions such as shunting, edge welding, and shim/gap welding. It was found that under extreme cases for shunt and edge welds, the dynamic resistance curve changes significantly. For the particular set up in this thesis, it was found that at a center to center weld shunting distance of 10 mm and an edge distance of approximately half the electrode face is statistically detectable. For shim/gap welding, the change in the dynamic resistance curve was present at a 1mm gap and less at the 2mm gap due to the set-up of the robot arm. When performing the welds under the same process conditions with adaptive welding, there was little change to the adaptive dynamic resistance curves. In the shunted condition, the adaptive welding extended the time and was able to overcome the shunting effect to produce an ideal nugget size. During edge welding it resulted in expulsion when it would otherwise not occur, producing undersized nuggets. In an analysis of the quality indicators of the weld controller, it was discovered that the Stabilization Factor is based on the average values of the weld, while the UIP values are based on the deviation of the dynamic resistance of the weld to the reference. Both the quality indicator variables the controller output were found to have no correlation to either the nugget diameter or the tensile strength of the welds. Thus, an alternative to make use of the data the controller collects was explored through a statistical approach of large data and regression modelling. A model with a fit of 40% was made for the similar stack up and validated with production parts, but it lacked the robustness to capture all the data. When attempting to replicate the study on a dissimilar weld situation, the laboratory data and the data from the production part resulted in an unacceptable fit. This was due to the strong effect of different robot welders on the dynamic resistance curve, the lack of robustness in creating the model, and lack of logic found in the model parameters and coefficients.

Kyu Won Choi (2019). Investigation of the use of Dynamic Resistance in Adaptive Welding and Statistical Relation to Quality. UWSpace. http://hdl.handle.net/10012/15070