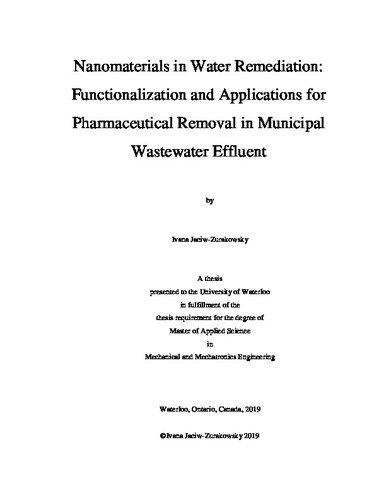 With an increasing population, there is a higher pressure on natural resources including water. Increased water consumption, altered hydrology and pollution, threaten the sustainability of aquatic ecosystems and water resources. The increasing contamination of water resources with a diversity of priority and emerging chemicals of concern has created a need for innovative water treatment solutions. Although current technologies can remove some of these chemicals new and more effective treatment solutions are still required for both water and wastewater applications. Nanomaterials have been widely studied for their potential for photocatalytic removal of contaminants in water treatment applications. Unfortunately, the low efficiency and difficulty with recovery of the catalyst material have limited implementation at the industrial or municipal scale. Functionalization of nanoparticles such as TiO2 is a possible mechanism to improve the efficiency of the photocatalytic reactions holds considerable promise for treatment applications. Plasmonic photocatalysis has widely been considered as a potential method to improve photocatalytic efficiency. Few studies have examined optimizations of the ratio of metal to metal-oxide in photocatalysts for improving the efficiency of photocatalytic reactions. In the current study, the ratio of silver was altered in zinc oxide nanoparticles and the photocatalytic efficiency determined. Silver-zinc oxide nanoparticles were hydrothermally synthesized beginning with zinc oxide nanoparticles blended with acid digester containing silver nitrate and methenamine (HMTA). Characterization of the synthesized nanomaterials found little difference in the bandgap (around 380 nm) of the different manufactured materials and the agglomeration levels of the nanomaterial, indicating a decrease in surface area and reactivity. However, this agglomeration was seen through all silver loadings, meaning that it is not a factor affecting the comparison of this study. A photocatalytic test was completed using six-cm collimated UV-LED beam (θbeam= 4 cm) light source setup with a heat sink, placed over a four-position magnetic stir plate (10.5 cm above the surface of the water). Twenty mg of the silver-zinc oxide nanoparticles were added to a 300 mL solution of 0.5 mM terephthalic acid (TPA) to measure hydroxyl production through the conversion of TPA into hydroxyterephthalic acid (HTPA). The conversion rate constants, calculated using a zero-order reaction rate model, were compared. An increase in silver resulted in an apparent increase in the photocatalytic efficiency of the nanomaterial as indicated by increased hydroxyl production. However, this did not result in a major change in the photocatalytic activity until the silver was greater than 700,000%. Previously published laboratory scale photocatalytic removal tests tend to use purified water as the matrix in experiments. However, actual industrial or municipal applications need to consider the natural waters and effluents that are a complex mixture of chemicals that can affect the efficiency of photocatalysts. Although nanoparticles have been proposed for the removal of emerging contaminants, such as pharmaceuticals, in water and wastewater few tests have been conducted under these actual conditions. The efficiency of TiO2 (P25) for the removal of representative pharmaceuticals in an actual wastewater matrix (i.e. Waterloo municipal wastewater effluent) was compared to the removal efficiency in pure (Milli-Q) water. Pharmaceutical removal tests were completed under UV light irradiation, and a model photocatalyst (P25) and compared to dark and non-photocatalyst conditions. After exposure to different periods of time the pharmaceuticals were isolated from solution using solid phase extraction (SPE) and quantified using liquid chromatography mass spectroscopy (LC-MS/MS). The removal was measured by comparing the reduction in concentration using the first-order reaction rate constants. Using UV irradiation combined with a photocatalyst removal of some pharmaceuticals to below the detection limit was observed in as little as 5 minutes in Milli-Q water. In contrast, in wastewater effluent photocatalysis removed fewer of the pharmaceutical compounds and there was an apparent decrease in the photocatalytic efficiency. The decrease in efficiency is likely due to the blocking of the UV light and scavenging of the generated reactive oxygen species by the organic matter in the wastewater effluent matrix. Although photocatalysis is a useful tool for the removal of pharmaceuticals from pure water matrices, the substantial decrease of the removal rate for a wastewater effluent matrix exemplifies the need for further efficiency improvements for applications in natural waters/effluents. The challenges surrounding the application of nanoparticles in photocatalytic treatment processes for water and wastewater treatment is explored and highlighted.