Development of an Autonomous Vehicle Platform 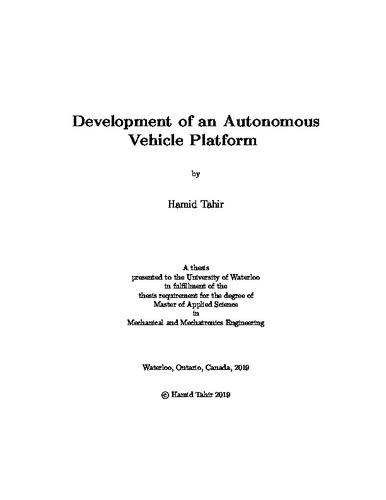 Autonomous vehicles and their related development are gaining a lot of traction as a promising up and coming technology. The Mechatronics Vehicle Systems lab at the University of Waterloo is well pioneered in the automotive industry and seeks to apply their knowledge and skills to autonomous vehicles. Having an autonomous vehicle development platform at the University allows for development and testing of state of the art algorithms that can potentially benefit the entire automotive industry. An autonomous driving platform based on a Chevrolet Equinox is proposed in this thesis. Various types of sensors are installed on the vehicle and interfaced, allowing for full coverage of the surrounding environment. A software platform is developed which uses ROS and Matlab simultaneously, benefiting from the libraries, tools, and resources that come with both. The hardware platform is designed with simplicity and functionality in mind. Moreover, a simulation platform is used for testing various algorithms before real world implementation. Various types of sensor calibrations are necessary to fully synchronize all the sensors on the platform spatially. A joint calibration method that allows for the simultaneous calibration of all 3D sensors sharing a common field of view is implemented. Specialized hand-eye calibration methods to calibrate the GPS navigation system to the LIDAR and camera sensors are explored. Furthermore, vehicle to everything interfacing is kept in mind and a calibration technique is presented in order to localize infrastructure mounted sensors to a GPS navigation system. The calibration techniques are tested and areas of improvement are revealed. The developed platform is tested with the task of autonomous lane keeping. The steering wheel angle of the vehicle is controlled by the developed algorithm utilizing the camera and GPS navigation solution. The algorithm is tested in simulation with good results. Before real world testing, time synchronization between various devices on the platform, as well as testing of the actuators' controllers is performed. Finally, the lane keeping algorithm is tested on the developed platform on the University of Waterloo Ring Road. The system is able to autonomously steer around the majority of the road which is approximately a 2.5 km distance.