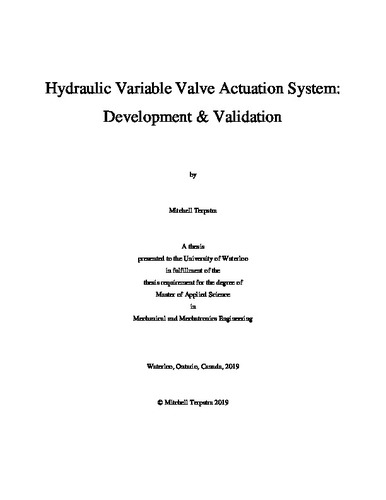 Conventional engines with camshafts with fixed timings force a compromise between performance at high engine loads and fuel economy at low engine loads. Adjusting internal combustion engine valve timing and lift through a variable valve actuation (VVA) system is an established method of improving engine performance [1]. A fully flexible hydraulic variable valve actuation (HVVA) system in development at the University of Waterloo allows the valve timing to be optimized for any engine operating condition. This project is a further development of this HVVA system. First, the previous prototype was thoroughly tested and evaluated. Major design issues and challenges were addressed, and changes were incorporated into a new prototype design. This prototype was designed to be robust and more compact than the previous system. A completely new concept was developed for the phasing system used to adjust the valve timings. The new HVVA design was manufactured, assembled, and installed on a single cylinder test engine. Initial experiments of the new HVVA system validated its ability to change engine valve timing and match the profiles of different VVA strategies. The system was able to switch between different profiles in <1s. It also gave insights into the dynamic characteristics of the hydraulic system not discovered during testing of previous prototypes but necessary for further development of the HVVA concept. Successful combustion tests were run up to 1500 RPM engine speeds using different engine valve timing profiles. The HVVA system reliably operated throughout all testing and proved the feasibility of this more compact system. It will be used as a platform for further demonstrations and validation of the HVVA concept.