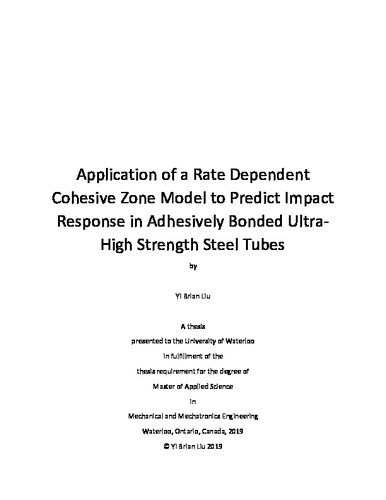 The design of multi-material lightweight vehicle (MMLV) structures incorporating structural adhesive joining requires advanced CAE supported by material characterization and computational model validation at the component level. In this thesis, tailored hot stamped (THS) ultra-high strength steel (UHSS) hat sections were joined using structural epoxy adhesive and tested under quasi-static and dynamic loading rates. The experiments were modelled numerically using an existing adhesive model with a cohesive zone method (CZM) formulation that was previously validated at the coupon level. The objectives of this study were two-fold: (i) to assess the performance of adhesive-only joints for UHSS structures; and (ii) to validate the CZM of the adhesive at the structural level. Three configurations of hot stamped Usibor® 1500-AS hat sections with varying strength and ductility (martensitic, soft flange, and three zone) were joined to form closed tubular structures (tubes) using a two-part toughened epoxy adhesive (IRSA 07333, 3M) applied to the flanges, with a bond line thickness of 0.178mm (0.007"). A custom fixture was used to secure the hat sections while oven-curing the adhesive (80°C for 30 minutes). The tubes were loaded in three-point bend, axial crush, and a novel Mode I opening (Caiman) configuration. Numerical models of the experiments were solved using an explicit dynamic finite element code (LS-DYNA R7.1.2). For validation of the adhesive model at the structural level, the simulated experiments were assessed based on global metrics such as overall loading response, peak load, energy absorption, displacement to failure, visual deformation mode. Where possible, crack extension along the adhesive joint was measured and compared to the model response. In general, all the experiments for various test conditions exhibited good repeatability in loading response and deformation pattern. One exception was the three-point bend experiments, which demonstrated an asymmetric deformation mode that considerably increased displacement to failure. While the models had difficulty in predicting displacement to failure, the predicted peak loads were in good agreement (7.14%). The axial crush models had good agreement in predicted deformation pattern, peak load (11.5%), and energy absorption (7.65%), but over predicted energy absorption of dynamic three zone model due to excessive oscillation. The Caiman models correlated well with the experiments (within 5%) and provided a controlled Mode I loading for model validation of predicting crack extension. This work demonstrated that THS UHSS joined with structural adhesives can achieve consistent loading response in support of model validation, and that surface preparation and specimen manufacture were critical factors in reducing test variability. One limitation with this study was that it proved difficult to assess the performance of the adhesive model when the response was dominated by the metal components, since the accuracy of the overall response could be limited by the fidelity of the steel constitutive model. With the exception of a few cases, the CZM adhesive model was able to predict the structural response of bonded components within 16%, based on kinetics and kinematics measured in the experimental tests.