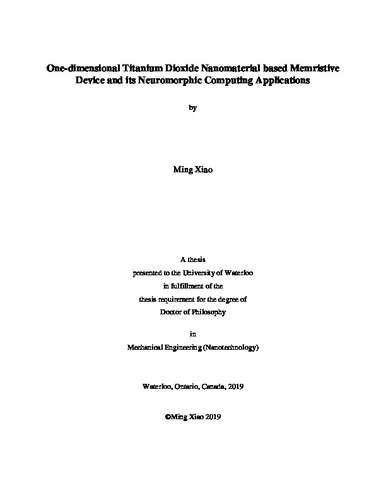 Memristor devices as the alternative to the next-generation non-volatile memory devices has been widely studied recently due to its advantages of simple structure, fast switching speed, low power consumption. Among all the different materials that demonstrate the potential of resistive switching behavior, memristor devices based on TiO2 has attracted particular attention considering its richness in switching mechanism associated with wide range of phases. Furthermore, one-dimensional (1D) nanomaterial based memristor devices demonstrate promising potential considering about its advantages of confinement of electron transport in individual nanowires, enabling precision engineering of electrical performance for stable and reliable memristor devices, high integration density potential, etc. In this research, we propose the use of facile hydrothermal methods to synthesize TiO2 nanowires for the fabrication of memristor devices. Three different types of devices were fabricated, i.e., based on TiO2 nanowire networks on Ti foil, TiO2 nanorod arrays grown on fluorine-doped tin oxide (FTO) substrate, and single TiO2 and titanate nanowire directly synthesized from TiO2 nanoparticles. The corresponding devices demonstrated promising resistive switching performance respectively and were further used for multilevel memory storage and more importantly, the emulation of artificial synapses for the application of neuromorphic computing. The corresponding switching mechanisms were explored and it was found that the oxygen vacancies in TiO2 nanowires during the hydrothermal process play an important role in the switching and charge transport mechanism. This work will improve the understanding of engineering the electrical performance of TiO2 based memristive devices and provide insights into the switching mechanism in 1D nanomaterial based memristive devices.