Evaluation of Polymeric Nanocomposites for the Detection of Toxic Gas Analytes 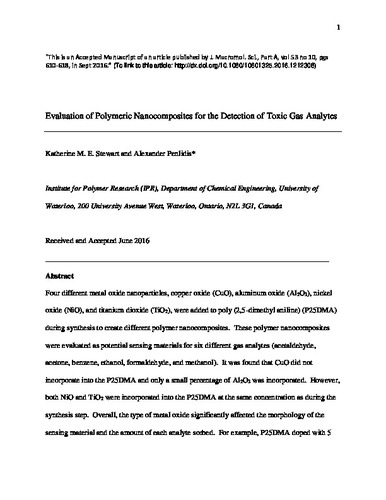 Four different metal oxide nanoparticles, copper oxide (CuO), aluminum oxide (Al2O3), nickel oxide (NiO), and titanium dioxide (TiO2), were added to poly (2,5-dimethyl aniline) (P25DMA) during synthesis to create different polymer nanocomposites. These polymer nanocomposites were evaluated as potential sensing materials for six different gas analytes (acetaldehyde, acetone, benzene, ethanol, formaldehyde, and methanol). It was found that CuO did not incorporate into the P25DMA and only a small percentage of Al2O3 was incorporated. However, both NiO and TiO2 ¬were incorporated into the P25DMA at the same concentration as during the synthesis step. Overall, the type of metal oxide significantly affected the morphology of the sensing material and the amount of each analyte sorbed. For example, P25DMA doped with 5 wt% Al2O3 had high selectivity towards ethanol, whereas P25DMA doped with 20 wt% TiO2 sorbed the most ethanol. However, P25DMA doped with 20 wt% TiO2 also sorbed a high amount of formaldehyde, making P25DMA doped with 20 wt% TiO2 less selective than P25DMA doped with 5 wt% Al2O3 towards ethanol with respect to formaldehyde.