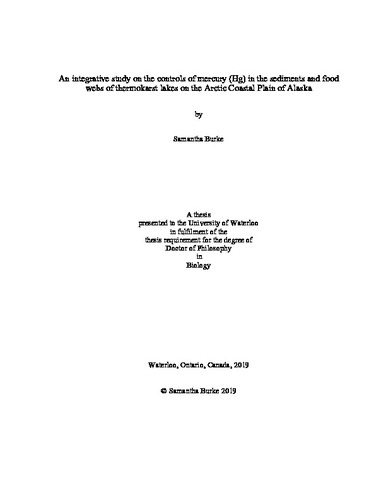 Arctic freshwater ecosystems are subject to profound climate-driven changes. Air temperatures are rising, leading to changes that include increased primary production and enhanced permafrost degradation. These and other climate-related effects interact to influence the accumulation of mercury in sediments and food webs of Arctic lakes. Mercury is a neurotoxin that is harmful to human and animal health, and in its methylated form, mercury can be taken up and biomagnified through food webs. The controls on mercury deposition, bioaccumulation, and biomagnification are complex and spatially variable. An area where especially little is known about spatial and temporal variability in mercury accumulation is in the food webs and sediments of lakes on the Arctic Coastal Plain of Alaska (ACP), a lake-rich region in northern Alaska. Sediment cores were collected from three thermokarst lakes on the ACP and analyzed to understand changes in, and drivers of, Hg accumulation over the past ~100 years (Chapter 2). Mercury accumulation in two of the three lakes was variable and high over the past century (mean=37.4 µg/m2/year and mean = 45.8 µg/m2/year), and largely controlled by sedimentation rate. Mercury accumulation in the third lake was lower (mean = 6.5 µg/m2/year), more temporally uniform, and was more strongly related to sediment Hg concentration than sedimentation rate. Sediment mercury concentrations were quantitatively related to measures of sediment composition and VRS-inferred chlorophyll-a, and sedimentation rates were related to various catchment characteristics. These results were compared to data from 37 previously studied Arctic and Alaskan lakes. Results from the meta-analysis indicate that lake thermokarst lakes have significantly higher and more variable Hg accumulation rates than non-thermokarst lakes, suggesting that properties of thermokarst lakes, such as thermal erosion, thaw slumping, and low hydraulic conductivity likely make these lakes prone to high and variable Hg accumulation rates. Following the observation that catchment influence varied spatially on the ACP, and that it affected the amount of, and pathways by which, mercury accumulated in lake sediments (Chapter 2), I hypothesized that catchment influence may also affect how mercury enters and accumulates in lake food webs on the ACP. In Chapter 3, six lakes were sampled across a physico-chemical gradient on the ACP to investigate variability in methylmercury levels ([MeHg]) in Ninespine stickleback (Pungitius pungitius), a fish species that was present in all lakes. Evidence suggested that bioaccumulation of MeHg through lake food webs was indirectly affected by degree of catchment influence. Methyl mercury concentrations in sediments and filter feeding invertebrates were higher in lakes that were inferred to be more autochthonous (less catchment influence), but higher in periphyton from lakes that were inferred to be more allochthonous (more catchment influence). Regardless of catchment influence, benthic invertebrates had higher MeHg levels than zooplankton. MeHg levels in Ninespine stickleback were significantly related to one tracer of catchment influence, sulphate concentration in lake water, and length-adjusted MeHg levels in Ninespine stickleback were best predicted by age-at-size, an indicator of growth (p=0.030). Together, lake sulphate concentration and fish age-at-size accounted for nearly all of the among-lake variability in length-adjusted [MeHg] in stickleback (R2=0.94, p=0.006). It is likely that different sources of production (littoral macrophyte/biofilm vs pelagic phytoplankton) and food web structure (detrital vs grazing) affect rates of methylation and uptake of MeHg into the six lake food webs that were studied, but further research is necessary. As growth was found to be the best biotic predictor of length-adjusted MeHg concentrations in fish (Chapter 3), the focus of Chapter 4 was to understand effects of parasitism on growth and mercury concentrations in stickleback. Parasites are an important and often poorly understood component of aquatic ecosystems. The cestode Schistocephalus pungitii is a parasite of Ninespine stickleback. Little is known about the effects of parasitism on the growth and ecology of Ninepsine stickleback, nor how parasitic infection affects MeHg concentration in this important prey fish species. Fish growth, MeHg concentrations, and incidence and intensity of parasitism in Ninespine stickleback were investigated using samples collected from six lakes on the Arctic Coastal Plain of Alaska. Comparisons were made between parasitized and unparasitized fish. In addition, differences between hosts and parasites in δ15N, [MeHg], and caloric density were investigated to assess potential implications of parasitism on mercury transfer through the food web. There were differences in infection rate (ranging between 8-98%) and parasitization indices (ranging from 12-23%) among lakes; however, in all lakes, cestode parasites had significantly lower 15N (p<0.0001) and [MeHg] (p=0.001) than their fish hosts, and tissue from parasitized stickleback had significantly higher [MeHg] than tissue from unparasitized stickleback (p=0.05). Higher MeHg concentrations ([MeHg)] in tissue from parasitized stickleback appears to be a result of decreased growth rates, as there was a positive relationship between infection rate (percent parasitized) and fish age-at-size (p=0.04), and it was previously shown (Chapter 3) that [MeHg] in stickleback is positively related to age-at-size. To predators, parasitized stickleback could actually represent a prey source with relatively lower [MeHg], because the relative mass and MeHg concentration of the parasite significantly lowers the overall mercury concentration of the “fish meal” (p<0.01). In addition, parasitized stickleback have a similar caloric density to their unparasitized conspecifics (p=0.11). Because higher infection rates have been observed (>50%) in other Arctic lakes, and because the fecundity of S. pungitii is predicted to increase with climate warming, it is possible that cestode parasites could actually create an overall dilution of mercury through the simple food chains of shallow Arctic lakes. This thesis represents the first in-depth analysis of mercury accumulation in lake sediments and mercury concentrations in food webs of lakes on the Arctic Coastal Plain of Alaska. Results of this research provide further evidence that mercury dynamics in lakes are complex and can be directly or indirectly influenced by several biotic and abiotic factors. It is clear that catchment characteristics play a significant, yet not fully understood, role in the deposition and accumulation of mercury in lake sediments, and that catchment characteristics also affect methylation and uptake of mercury into the food webs. Results from this research will ultimately help inform predictions of how fish mercury concentrations may respond to climate change.

Samantha Burke (2019). An integrative study on the controls of mercury (Hg) in the sediments and food webs of thermokarst lakes on the Arctic Coastal Plain of Alaska. UWSpace. http://hdl.handle.net/10012/14823