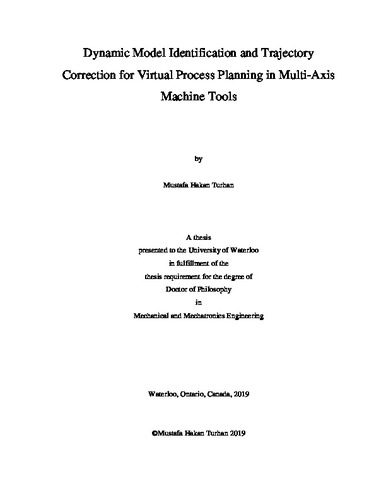 In today’s industry, the capability to effectively reduce production time and cost gives a manufacturer a vital advantage against its competitors. Specifically, in the machining industry, the ability to simulate the dynamic performance of machine tools, and the physics of cutting processes, is critical to taking corrective actions, achieving process and productivity improvements, thereby enhancing competitiveness. In this context, being able to estimate mathematical models which describe the dynamic response of machine tools to commanded tool trajectories and external disturbance forces plays a key role in establishing virtual and intelligent manufacturing capability. These models can also be used in virtual simulations for process improvement, such as compensating for dynamic positioning errors by making small corrections to the commanded trajectory. This, in turn, can facilitate further productivity improvement and part quality in multi-axis manufacturing operations, such as machining. This thesis presents new methods for identifying the positioning response and friction characteristics of machine tool servo drives in a nonintrusive manner, and an approach for enhancing dynamic positioning accuracy through commanded trajectory correction via Iterative Learning Control (ILC). As the first contribution, the linear transfer functions correlating the positioning response to the commanded trajectory and friction disturbance inputs are identified using a new pole search method in conjunction with least squares (LS) projection. It is validated that this approach can work with in-process collected data, and demonstrates superior convergence and numerical characteristics, and model prediction accuracy, compared to an earlier ‘rapid identification’ approach based on the application of classical Least Squares for the full model. Effectiveness of the new method is demonstrated in simulations, and in experimental case studies for planar motion on two different machine tools, a gear grinding machine and a 5-axis machining center. Compared to the earlier approach, which could predict servo errors with 10-68% closeness, the new method improves the prediction accuracy to 0.5-2%. In the simulation of feed drives used in multi-axis machines, high fidelity prediction of the nonlinear stick-slip friction plays an important role. Specifically, time-dependent (i.e., dynamic) friction models help to improve the accuracy of virtual predictions. While many elaborate models have been proposed for this purpose, such as the generalized Maxwell-slip (GMS) model, their parameters can be numerous and difficult to identify from limited field data. In this thesis, as the second contribution, a new and highly efficient method of parameterizing the pre-sliding (hysteretic) portion of the GMS friction model is presented. This approach drastically reduces the number of unknown variables to identify, by estimating only the affective breakaway force, breakaway displacement, and ‘shape factor’ describing the shape of the pre-sliding virgin curve. Reduction in the number of unknowns enables this ‘reduced parameter’ GMS model to be identified much more easily from in-process data, compared to the fully parameterized GMS model, and the time-dependent friction dynamics can still be simulated accurately. Having improved the positioning response transfer function estimation and friction modeling, as the third contribution of this thesis, these two elements are combined together in a 3-step process. First, the servo response is estimated considering simplified Coulomb friction dynamics. Then, the friction model is replaced and identified as a reduced parameter GMS model. In the third step, the transfer function poles and zeros, and the reduced parameter GMS model, are concurrently optimized to replicate the observed experimental response with even greater fidelity. This improvement has been quantified as 12-44% in RMS and 28-54% in MAX values. This approach is successful in servo systems with predominantly rigid body behavior. However, its extension to a servo system with vibratory dynamics did not produce an immediately observed improvement. This is attributed to the dominance of vibrations in response to the commanded trajectory, and further investigation is recommended for future research. Having an accurate model of a multi-axis machine’s feed drive response allows for the dynamic positioning errors, which can lead to workpiece inaccuracy or defects, to be predicted and corrected ahead of time. For this purpose, ILC has been investigated. It is shown that through ILC, 1-2 orders of magnitude reduction in the servo errors is possible. While ILC is already available in certain commercial CNC systems, its training cycle (which is performed during the operation of the machine tool) can lead to part defects and wasted productive machining time. The new idea proposed in this thesis is to perform ILC on a virtual model, which is continuously updated via real-time production data using the identification methods developed in this work. This would minimize the amount of trial and error correction needed on the actual machine. In the course of this thesis research, after validating the effectiveness of ILC in simulations, to reliably and safely migrate the virtual modeling and trajectory correction results into industry (such as on a gear grinding machine tool), the author initiated and led the design and fabrication of an industry-scale testing platform, comprising a Siemens 840D SolutionLine CNC with a multi-axis feed drive setup. Majority of this implementation has been completed, and in near future work, the dynamic accuracy and productivity improvements facilitated with ‘virtually’ tuned ILC are expected to be demonstrated experimentally and tested in industry.