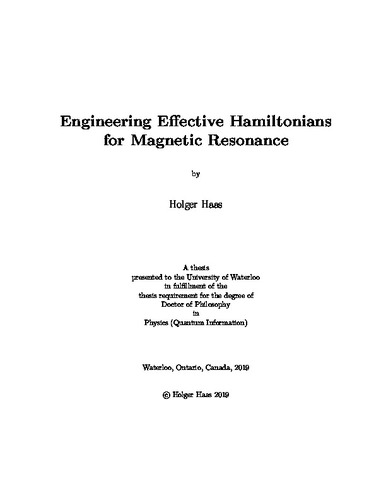 Effective Hamiltonian engineering is a powerful technique that utilises time-dependent perturbation theory to suppress or enhance certain effects that arise from otherwise weak Hamiltonian terms, when an experimenter attempts to control the evolution of a quantum system. With this thesis we conduct theoretical, numerical and experimental explorations of two somewhat different kinds of effective Hamiltonian engineering in magnetic resonance, aimed at elongating spin coherence times and increasing spin polarization. First, we provide a general framework for computing arbitrary time-dependent perturbation theory terms relevant for effective Hamiltonian engineering, as well as their gradients with respect to control variations, that immediately enables the use of gradient methods for optimizing these terms. We demonstrate the method in various numerical control engineering examples, including decoupling, recoupling, and robustness to control errors and stochastic errors. We then utilize the method in high-resolution nanoscale magnetic resonance experiments that use high-sensitivity silicon nanowire based force detection. With our numerically engineered control sequences, that are optimized to suppress spin decoherence under dipolar and chemical shift Hamiltonians, we achieve an increase by a factor of 500 in the proton spin coherence time for low-temperature, (50-nm)^3 polystyrene sample. We harness the enhanced spin coherence times for magnetic resonance imaging experiments on the nanoscale, and achieve one-dimensional imaging resolution below 2 nm on the same sample. Secondly, we study low-temperature, high magnetic field nuclear hyperpolarization of phosphorus donor nuclei in isotopically enriched 28-silicon crystal irradiated with nonresonant above band gap laser light. We demonstrate hyperpolarization with a time constant of 51.5 s, and introduce a phonon-mediated effective Hamiltonian model detailing the process. We verify our model by designing and conducting a series of magnetic resonance experiments.