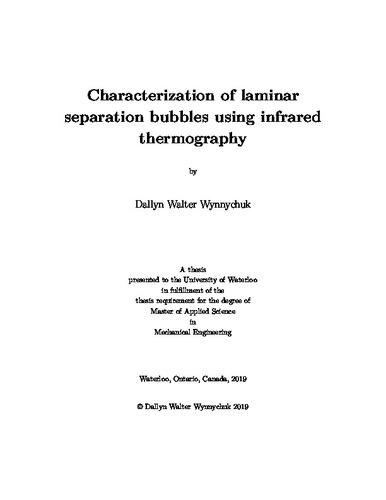 An experimental investigation of laminar separation bubbles is presented, demonstrating the feasibility of employing infrared thermography for identification and quantitative characterization of a laminar separation bubble. The investigation is comprised of a series of wind tunnel tests performed on two main geometries. The first experimental investigation is performed on a flat plate, where a laminar separation bubble is formed upstream of a vertically mounted fence. Velocity field, surface pressure, and surface temperature results are presented from three main flow conditions, corresponding to fence height-based Reynolds numbers of 27,000, 36,000, and 45,000. The second experimental investigation is performed on a NACA 0018 airfoil. Velocity field and surface temperature results are presented at two main flow conditions, pertaining to an angle of attack of 4 degrees and chord-based Reynolds numbers of 80,000 and 120,000. For each experimental geometry, velocity field measurements provide initial estimations of the size and location of laminar separation bubbles, while highlighting details regarding the transition process, which are used to formulate expected convective heat transfer variations on the model surface. For both experimental investigations, locations of mean separation and transition are estimated where the streamwise gradient of surface temperature reaches a maximum and minimum value, respectively, while mean reattachment is estimated at the location of minimum surface temperature. Characterization of the separated region with this methodology is shown to reasonably agree with baseline estimates within experimental uncertainty. However, fundamental assumptions regarding uniformity of the applied radiative heat flux on the model surface are required. In this regard, a less restrictive representation of the convective heat transfer variation is obtained by performing a differential energy balance at the model surface, considering surface temperatures in both quiescent and flow conditions. The energy balance allows for an estimated streamwise variation of the convective heat transfer coefficient. The approach yields good agreement with reference measurements on both geometries, with higher-precision estimation attained in airfoil experiments since the airfoil model was designed to minimize wall-normal conduction in the material. Transient measurements of surface temperature decay following a change in radiative flux are also investigated and used to directly estimate the variation of convective heat transfer coefficient on the airfoil. The convective heat transfer coefficient is shown to follow the expected variation; however, significant noise propagation and relatively low temporal resolution adversely influence the results, such that transient-based characterization should be restricted to situations where quasi-steady state measurements are not possible, or key simplifying assumptions cannot be satisfied.