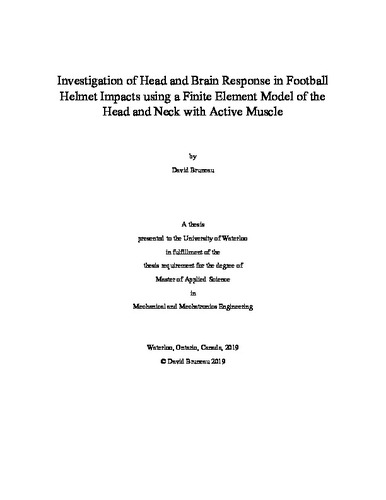 Investigation of Head and Brain Response in Football Helmet Impacts using a Finite Element Model of the Head and Neck with Active Muscle - revised 6/20/2019 (15.63Mb)

Among high school and college athletes, ∼50% of American football players report a concussion each year, and at least 30% of players sustain more than one concussion per year, which may be reduced in part through improvements in head protection. Football helmets are commonly assessed experimentally using a linear impactor test, where a helmet is donned on a Hybrid III Anthropometric Testing Device (ATD) head and neck affixed to a sliding carriage, and is struck by a deformable impactor. The biofidelity of the Hybrid III ATD is known to have some limitations: the ATD was developed to predict anterior-posterior response while the current test includes multi-directional loading, and the passive neck structure does not simulate active muscle. Additionally, the linear impactor test does not include the body of the player, which may influence the head response. The current study used an advanced Human Body Model (HBM) combined with a validated finite element model of a modern football helmet to assess the importance of the aforementioned limitations, and was then extended to investigate the response of the brain to impact scenarios. A virtual evaluation tool provides the advantage of assessing changes to current helmet designs, and new helmet designs prior to the construction of a physical prototype. An existing ATD head and neck model validated in the linear impact configuration, and a validated football helmet model previously assessed with 60 impact cases, were used as a baseline for the assessment of head response in football impact scenarios. The Global Human Body Models Consortium (GHBMC) head and neck model (HNM) and Full Human Body Model (FBM) were integrated with the helmet and linear impactor, and assessed using the same boundary conditions as the ATD. The HNM allowed for the investigation of muscle activation, using a muscle activation scheme representing a player braced for impact, and a baseline case with no activation. The models were used in three studies to assess: (1) the kinematic response of the ATD and HNM, (2) the effect of ATD and HNM boundary conditions on brain response, and (3) the role of the whole body mass and inertia on head and brain response. The first study compared the head kinematics of the HNM to those of the ATD simulation using the boundary conditions of the linear impactor test. It was found that the HNM and ATD had similar head acceleration and angular velocity in the primary direction of impact, and exhibited similar responses regardless of muscle activation. Differences between the ATD and HNM were identified in the axial head acceleration, attributed to axial neck stiffness, and longer term metrics measured at the base of the neck differed but did not have a large effect on the short-term head response assessed using existing head response metrics (HIC, BrIC, HIP). In the second study, two boundary conditions were investigated for a head FE model: (1) a commonly-used simplified boundary condition where head model kinematics are prescribed from experimentally measured ATD kinematics and (2) a full simulation of the HNM, helmet and linear impactor. The second approach enables the opportunity to assess the effect of modifications to the helmet. While the lateral and rear impacts exhibited similar levels of Maximum Principal Strain (MPS) in the brain tissue using both the prescribed kinematics and simulated HNM boundary condition, differences were noted in the frontal orientation (MPS varied by <43%), attributed to geometric differences between the physical ATD and simulated HNM which influenced the angular kinematics in this orientation. It was also found that Cumulative Strain Damage Measure was more sensitive to the boundary condition than MPS. The objective of the third study was to investigate the role of whole body mass and inertia on head and brain response in a football impact. The helmet was integrated with an unconstrained FBM and the response was compared to the HNM integrated with the helmet. While the motion at the base of the neck differed after 20 ms (no rotation occurred here in the HNM), the kinematic response of the head in the FBM and HNM remained mostly similar until late in the impact (50 ms), regardless of muscle activation, which had little effect on both the FBM and HNM. Comparing the FBM and HNM, the brain response exhibited some small (<15%) differences between 30 and 50 ms, attributed to small differences in angular velocity during this time. Overall, the three studies demonstrated that biofidelic HBM predict similar head kinematics to those measured using the linear impactor testing of an ATD and the comparable ATD FE model. The primary exception was differences in axial head acceleration, which was attributed to the high axial stiffness of the ATD neck compared to a more human-like neck model. For the short timeframes considered using conventional head response metrics, the two muscle activation schemes considered did not have a considerable effect on the head kinematics or brain deformation. In the future, the coupled HNM and helmet could be used as a tool for improving helmet performance by directly simulating the effect of design changes on head and brain response, prior to building physical prototypes.