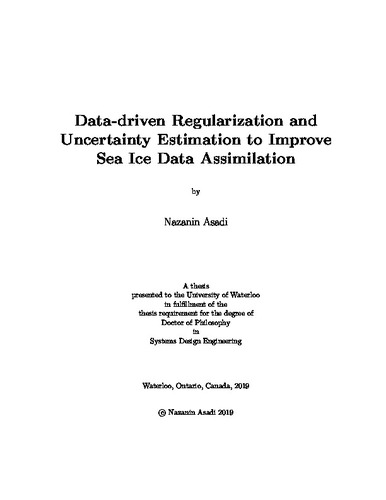 Accurate estimates of sea ice conditions such as ice thickness and ice concentration in the ice-covered regions are critical for shipping activities, ice operations and weather forecasting. The need for this information has increased due to the recent record of decline in Arctic ice extent and thinning of the ice cover, which has resulted in more shipping activities and climate studies. Despite the extensive studies and progress to improve the quality of sea ice forecasts from prognostic models, there is still significant room for improvement. For example, ice-ocean models have difficulty estimating the ice thickness distribution accurately. To help improve model forecasts, data assimilation is used to combine observational data with model forecasts and produce more accurate estimates. The assimilation of ice thickness observations, compared to other ice parameters such as ice concentration, is still relatively unexplored since the satellite-based ice thickness observations have only recently become common. Also, preserving sharp features of ice cover, such as leads and ridges, can be difficult, due to the spatial correlations in the background error covariance matrices. At the same time, the current ice concentration assimilation systems do not directly assimilate high resolution sea ice information from synthetic aperture radar (SAR), even though they are the main source of information for operational production of ice chart products at the Canadian Ice Service. The key challenge in SAR data assimilation is automating the interpretation of SAR images. To address the problem of assimilating ice thickness observations while preserving sharp features, two different objective functions are studied. One with a conventional l2-norm and one imposing an additional l1-norm on the derivative of the ice thickness state estimate as a sparse regularization. The latter is motivated by analysis of high resolution ice thickness observations derived from an airborne electromagnetic sensor demonstrating the sparsity of the ice thickness in the derivative domain. The data fusion and data assimilation experiments are performed over a wide range of background and observation error correlation length scales. Results demonstrate the superiority of using a combined l1-l2 regularization framework especially when the background error correlation length scale was relatively short (approximately five times the analysis grid spacing). The problem of automated information retrieval from SAR images has been explored in a problem of ice/water classification. The selected classification approach takes advantage of neural networks to produce results comparable to a previous study using logistic regression. The employed dataset in both studies is a comprehensive dataset consisting of 15405 SAR images over a seven year period, covering all months and different locations. In addition, recent neural network uncertainty estimation approaches are employed to estimate the uncertainty associated with the classification of ice/water labels, which was not explored in this problem domain previously. These predicted uncertainties can improve the automated classification process by identifying regions in the predictions that should be checked manually by an analyst.