Spontaneous eye-movements in neutral and emotional gaze-cuing: An eye-tracking investigation 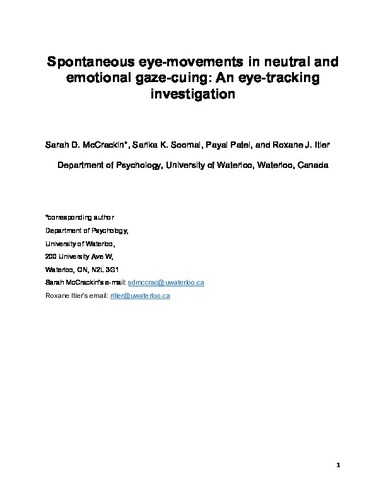 Our attention is spontaneously oriented in the direction where others are looking. This attention shift manifests as faster responses to peripheral targets when they are gazed at by a central face instead of gazed away from, and this effect is even more pronounced when the face expresses an emotion. This so called gaze-cuing effect, and its enhancement by emotion, is thought to reflect covert attention orienting. However, eye movements are typically not monitored in gaze-cuing paradigms, yet free viewing and saccadic reaction time research suggests individuals commonly and quickly look at gazed-at locations. Furthermore, in dynamic gaze-cuing studies, emotional faces differ from neutral faces in their affective content but also in their apparent facial motion, both of which could affect participants' eye-movements. We investigated the contribution of overt orienting to the gaze-cuing effect by monitoring eye-movements during emotional and neutral gaze-cuing trials. We found that eye-movements were infrequent, and when they occurred, they were directed toward the target, not toward the gazed-at location. Removing trials with eye-movements did not affect gaze-cuing much, confirming it reflects a covert attention process. However, participants were more likely to move their eyes during neutral trials, which lacked perceived face movement, than during emotion trials or neutral movement trials. Including these eye-movement contaminated trials in our analysis resulted in an impaired ability to detect the gaze-cuing variations with emotion. In contrast, removing trials with eye-movements, or including a neutral movement control such as a neutral tongue protrusion, revealed more subtle emotional modulation of gaze-cuing.