Is blur sensitivity altered in children with progressive myopia? 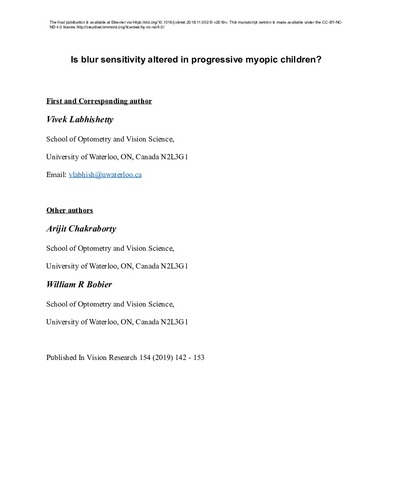 School aged children with progressive myopia show large accommodative lags to blur only cue which is suggestive of a large depth of focus (DOF). While DOF measures are lacking in this age group, their blur detection and discrimination capacities appear to be similar to their non-myopic peers. Accordingly, the current study quantified DOF and blur detection ability in progressive myopic children showing large accommodative lags compared to their non-myopic peers and adults. Blur sensitivity measures were taken from 12 children (8–13 years, 6 myopes and 6 emmetropes) and 6 adults (20–35 years). DOF was quantified using step changes in the lens induced defocus while the subjects viewed a high contrast target through a Badal lens at either 2 or 4D demand. Blur detection thresholds (BDT) were tested using a similar high contrast target in a 2-alternate forcedchoice paradigm (2AFC) at both the demands. In addition to the large accommodative lags, micro fluctuations and DOF were significantly larger in myopic children compared to the other groups. However, BDTs were similar across the three groups. When limited to blur cues, the findings of a large DOF coupled with large response lags suggests that myopes are less sensitive to retinal defocus. However, in agreement to a previous study, refractive error had no influence on their BDTs suggesting that the reduced sensitivity to the defocus in a myopic eye appears to be compensated by some form of an adjustment in the higher visual processes to preserve the subjective percept even with a poor retinal image quality.