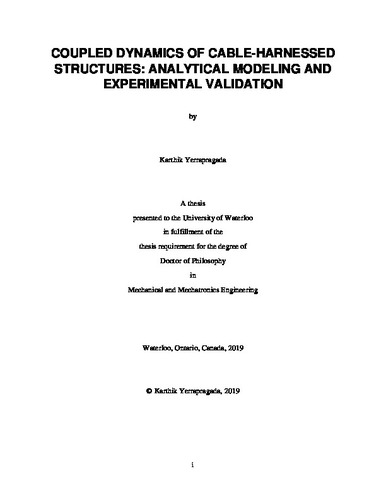 This thesis presents analytical models to study the vibration characteristics of cable-harnessed beam structures motivated by space structure applications. The distributed parameter models proposed in this work considers into account the effect of coupling between various coordinates of vibration such as the bending in the out of plane, in-plane direction, axial and the torsion coordinates. The mathematical models are presented for structures with straight cable wrapping pattern at an offset distance, periodic and non-periodic wrapping pattern. Numerous theoretical simulations are performed to highlight the importance of having a coupled vibration model and the analytical models are validated with experiments. Chapter 2.1 presents a distributed parameter model to study the vibrations of beam with straight cable pattern at an offset distance. The structure is modelled using Euler-Bernoulli and Timoshenko beam theories. The presented model studies the effects of coupling between various coordinates of vibrations. Strain and kinetic energy expressions are developed using linear displacement field assumptions and Green-Lagrange strain tensor. The governing coupled partial differential equations for the cable-harnessed beam that includes the effects of the cable pre-tension are found using Hamilton’s principle. The effects of the offset position of the cable, pre-tension and radius are studied on the natural frequencies of the system. The natural frequencies from the coupled Euler Bernoulli, Timoshenko and decoupled analytical models are found and compared to the results of the Finite Element Analysis. In Chapter 2.2, a mathematical model to study the coupled vibrations in cable-harnessed beam with periodic wrapping pattern is presented. The structure is modeled using Euler-Bernoulli and Timoshenko beam theories. The fundamental element of the wrapping pattern consists of diagonal cable section along with lumped mass section at the end of each element. An equivalent fully coupled continuum model is presented with goal of obtaining constant coefficient partial differential equations. Sensitivity analysis by the varying the cable radius, number of fundamental elements on the natural frequencies is also performed. The concept of transition frequency in Timoshenko beam theory is also studied for cable-harnessed structures. The effect of cable radius on the transition frequency is presented. Natural frequencies and mode shapes for both the spectra are presented for simply supported boundary condition and the results are compared to the bare beam to show the effect of cabling on the behavior of the structure for both the spectra of Timoshenko beam theory. Chapter 2.3, presents an analytical model to study the coupled vibrations of cable-harnessed structures with non-periodic wrapping pattern. The exact coupled partial differential equations of the structure are developed using Euler-Bernoulli (EB) theory. The analytical model assumes each fundamental element of the structure has different displacement, which means the structure is discretized at the interface of two different fundamental elements by applying the continuity conditions along with the cantilever boundary condition and the model is solved for natural frequencies, mode shapes and frequency response functions. In non-periodic wrapping, the wrapping angle changes for each fundamental element. The coupled exact model developed in Chapter 2.3 is an improvement of the model presented for the periodic wrapping patterns and is compared to the decoupled model for non-periodic wrapping patterns. In Chapter 3.1, the experimental study and model validations for the coupled dynamics of a cable-harnessed beam structure are presented. The system under consideration for the experiment consists of multiple pre-tensioned cables attached along the length of the host beam structure positioned at an offset distance from the beam centerline. Analytical model presented by the coupled partial differential equations (PDEs) for various coordinates of vibrations are found and the frequency response functions (FRFs) obtained for both Euler-Bernoulli and Timoshenko-based models are compared to those from the experiments for validation. In Chapters 3.2 and 3.3, experiments are performed on the cabled beam structures with periodic and non-periodic wrapping patterns and the frequency response functions obtained from coupled and decoupled models are compared to the experimental frequency response functions. The experimental mode shape animation plots of the torsion dominant and in-plane dominant modes are also presented to identify the type of modes associated with the sharp peaks observed in the out-of-plane bending frequency response functions.