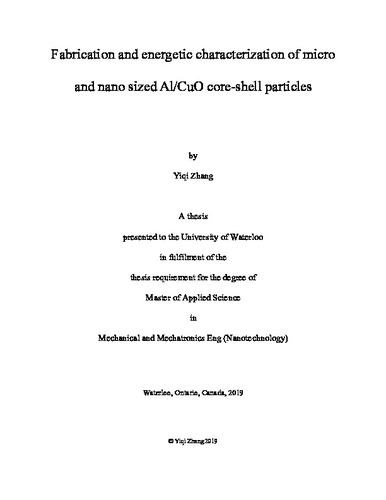 Thermite is one type of energetic material which could release a large amount of heat through an oxidation-reduction reaction. Thermite material has a lot of application in joining, metal refining and propulsion. Al/CuO is a well-studied thermite system enabling high energy release and production of pure copper from the reaction. Common Al/CuO thermites include composites of Al and CuO micro- and nano-particles, multi-layered Al and CuO structures, and agglomeration of particles. There is a gap in fabrication and characterization of individual and spherical Al/CuO core-shell particles that have promising application in mobile delivery of energy. A new synthesis method for producing spherical Al/CuO particles with a core-shell structure is introduced in this thesis. The compositions and microstructures of as-produced samples are investigated during fabrication and over the thermite reaction through which the core-shell geometry is characterized and the reaction mechanism is studied.