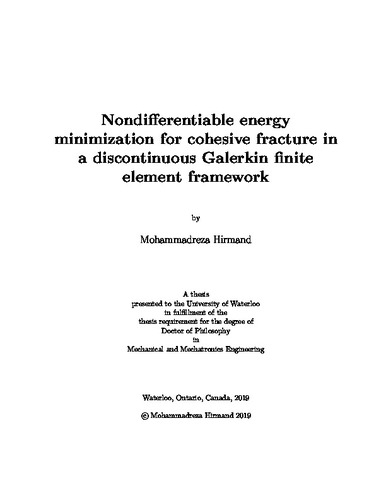 Until recently, most works on the computational modelling of fracture relied on a Newtonian mechanics approach, i.e., momentum balance equations describing the motion of the body along with fracture criteria describing the evolution of fractures. Robustness issues associated with this approach have been identified in the previous literature, several of which, as this thesis shows, due to the discontinuous dependence of stress field on the deformation field at the time of insertion of displacement discontinuities. Lack of continuity limits applicability of the models and undermines reliability of the numerical solutions. In particular, solutions often show non-convergent behaviour with time step refinement and exhibit nonphysical velocity fields and crack activation patterns. In addition, implicit time-stepping schemes, which are favoured in quasi-static and low-velocity problems, are challenging in such models. This is not a coincidence but a manifestation of algorithmic pitfalls of such methods. Continuity of stresses is in general hard to achieve in a computational model that employs a crack initiation criterion. Energy (variational) approaches to fracture have gained increased popularity in recent years. An energy approach has been shown to avoid introduction of a crack initiation criterion. The central idea of this model is the minimization of a mechanical energy functional, whose term representing the energy due to the cracks is a nondifferentiable function of the interface openings at zero opening displacement. A consequence of this formulation is that crack initiation happens automatically as a by-product of energy minimization. This avoids the complexities arising from the introduction of an extrinsic activation criterion but entails minimization of a nondifferentiable potential. The aim of this research is to develop robust and efficient computational algorithms for numerical implementation of the energy approach to cohesive fracture. Two computational algorithms have been proposed in a discontinuous Galerkin finite element framework, including a continuation algorithm which entails successive smooth approximations of the nondifferentiable functional and a block coordinate descent algorithm which uses generalized differential calculus for the treatment of nondifferentiability. These methods allow for a seamless transition from the uncracked to the cracked state, making possible the use of iterative solvers with implicit time-stepping, and completely sidestepping robustness issues of previous computational frameworks. A critical component of this work is validation of the robustness of the proposed numerical methods. Various numerical simulations are presented including time step and mesh size convergence studies and qualitative and quantitative comparison of simulations with experimental observations and theoretical findings. In addition, an energy-based hydro-mechanical model and computational algorithm is presented for hydraulic fracturing in impermeable media, which shows the crucial importance of continuity in multi-physics modelling. A search algorithm is developed on the basis of graph theory to identify the set of fluid-pressurized cracks among cracks in naturally fractured domains.