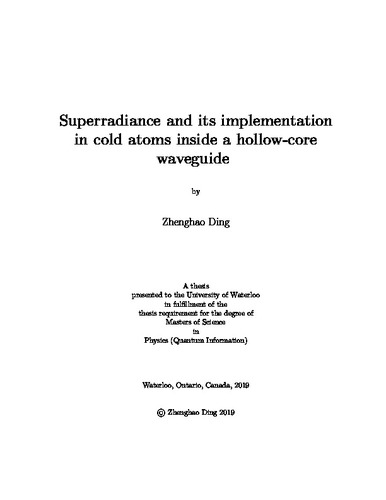 In this thesis, I am intending to understand the cooperative effect of an ensemble of quantum emitters, which constitutes the preliminary elements of our current experimental investigations towards realization of an ultra-narrow linewidth superriant laser. In the first part of the thesis, I investigate the basics of the theory of superradiance (SR), which includes the full derivation of the Hamiltonian and the Lindblad equation for an ensemble of two-level atoms in both free-space and a single-mode waveguide. In addition, I construct the simulations for observing the transition from single-atom uncorrelated spontaneous emission to superradiance in various physical settings, as well as a simulation for the understanding of the cooperative effects of an ensemble of two-level atoms inside an optical cavity. Then, in the second part of the thesis, I introduce the experimental progress we have been making to observe SR with an ensemble of laser-cooled Cs atoms inside a hollow-core photonic crystal fiber (HCPCF). In our experiment, the Cs atoms, initially cooled using a magneto-optical trap (MOT), are guided and confined inside a short piece of HCPCF with a magic-wavelength dipole trap. Currently we have successfully implemented a novel detection methods for studying superradiance.

Zhenghao Ding (2019). Superradiance and its implementation in cold atoms inside a hollow-core waveguide. UWSpace. http://hdl.handle.net/10012/14686