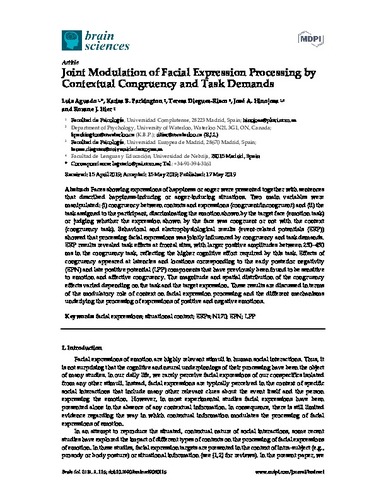 Faces showing expressions of happiness or anger were presented together with sentences that described happiness-inducing or anger-inducing situations. Two main variables were manipulated: (i) congruency between contexts and expressions (congruent/incongruent) and (ii) the task assigned to the participant, discriminating the emotion shown by the target face (emotion task) or judging whether the expression shown by the face was congruent or not with the context (congruency task). Behavioral and electrophysiological results (event-related potentials (ERP)) showed that processing facial expressions was jointly influenced by congruency and task demands. ERP results revealed task effects at frontal sites, with larger positive amplitudes between 250–450 ms in the congruency task, reflecting the higher cognitive effort required by this task. Effects of congruency appeared at latencies and locations corresponding to the early posterior negativity (EPN) and late positive potential (LPP) components that have previously been found to be sensitive to emotion and affective congruency. The magnitude and spatial distribution of the congruency effects varied depending on the task and the target expression. These results are discussed in terms of the modulatory role of context on facial expression processing and the different mechanisms underlying the processing of expressions of positive and negative emotions.