A Framework for Human Motion Strategy Identification and Analysis 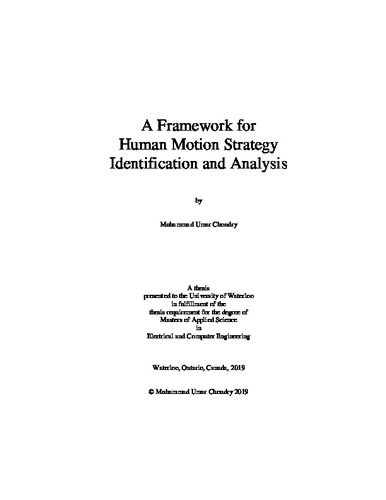 The human body has many biomechanical degrees of freedom and thus multiple movement strategies can be employed to execute any given task. Automated identification and classification of these movement strategies have potential applications in various fields including sports performance research, rehabilitation, and injury prevention. For example, in the field of rehabilitation, the choice of movement strategy can impact joint loading patterns and risk of injury. The problem of identifying movement strategies is related to the problem of classifying variations in the observed motions. When differences between two movement trajectories performing the same task are large, they are considered to be different movement strategies. Conversely, when the differences between observed movements are small, they are considered to be variations of the same movement strategy. In the simplest scenario a movement strategy can represent a cluster of similar movement trajectories, but in more complicated scenarios differences in movements could also lie on a continuum. The goal of this thesis is to develop a computational framework to automatically recognize different movement strategies for performing a task and to identify what makes each strategy different. The proposed framework utilizes Gaussian Process Dynamical Models (GPDM) to convert human motion trajectories from their original high dimensional representation to a trajectory in a lower dimensional space (i.e. the latent space). The dimensionality of the latent space is determined by iteratively increasing the dimensionality until the reduction in reconstruction error between iterations becomes small. Then, the lower dimensional trajectories are clustered using a Hidden Markov Model (HMM) clustering algorithm to identify movement strategies in an unsupervised manner. Next, we introduce an HMM-based technique for detecting differences in signals between two HMM models. This technique is used to compare latent space variables between the low-dimensional trajectory models as well as differences in degrees-of-freedom (DoF) between the corresponding high-dimensional (original) trajectory models. Then, through correlating latent variable and DoF differences movement synergies are discovered. To validate the proposed framework, it was tested on 3 different datasets – a synthetic dataset, a real labeled motion capture dataset, and an unlabeled motion capture dataset. The proposed framework achieved higher classification accuracy against competing algorithms (Joint Component Vector and Kinematic Synergies) where labels were known apriori. Additionally, the proposed algorithm showed that it was able to discover strategies that were not known apriori and how the strategies differed.