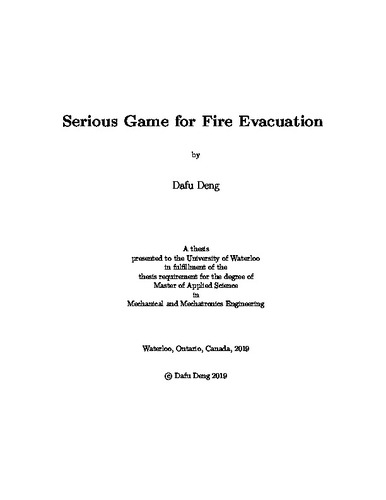 Fire safety for buildings has been of increasing concern due to the increase in occupant density in modern-day infrastructures. Efforts have been made by civil engineers to reduce loss in building fire accidents. For example, building codes have been refined to reduce the potential damage caused by fire by enforcing installation of fire detectors, alarm system, ventilation system, and sprinkler system. In addition, current building codes regulate the number of exits as well as the widths and heights of exits to allow an efficient evacuation process if the fire goes out of control. However the fire evacuation training aspect of fire safety is relatively immature. The fire evacuation process is still trained by carrying out traditional fire drills. However, the value of traditional fire drills has been questioned. Traditional fire evacuation drills fail to present a realistic fire environment to the participants. Traditional fire drills fail to raise enough seriousness for the participants since in most cases participants are informed about the drills beforehand. The cost of conducting these traditional fire drills can also be very high. Motivated by the problems faced by traditional fire drills, this research explores a new approach to more effectively and economically train people regarding the fire evacuation process. The new approach is to use a video game to train people for fire evacuation. The whole idea of using games for training and educational purposes falls under the concept of Serious Gaming, which has shown auspicious results in fields of military training, medical training, pilot training, and so on. In the virtual game environment, the fire environment can be simulated and rendered to the players. Doing so can allow the players to experience a more realistic fire environment and hence better prepare them for what to do in response to fire accidents. By setting a proper rewarding system, the game can motivate the players to treat the training more seriously. Also, since the training is carried out in the form of a game, it is more engaging and less costly. Currently, the game has been developed to render smoke and control the movement of agents. In order to make the game environment more realistic, the smoke is simulated and rendered using fire dynamics, and the agent movement is controlled by appropriate pedestrian models. It is worth mentioning that pedestrian modeling is still a relatively immature field of science and this game also serves as a tool for collecting and analyzing data for pedestrian models.