Use of Sensors for Fire Detection and Monitoring 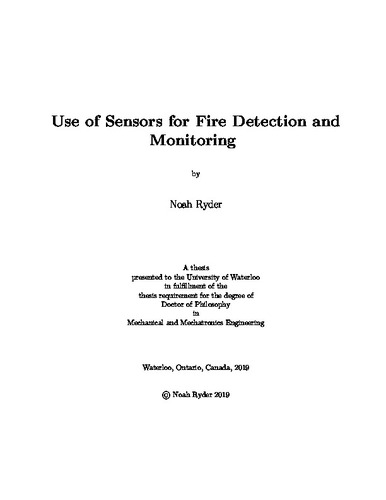 The ultimate goal of placing fire detection systems in buildings and structures is to allow for the rapid detection of fire and accurate prediction of ensuing fire behavior. Through a-priori prediction of how a fire might evolve, relevant information can be delivered to the appropriate stakeholders. In the near-term, development of detection systems which detect fire events more quickly, with better discrimination against nuisance and false alarms, and allow real-time monitoring of the state of a fire is a critical interim step. If we are able to detect fires earlier than is presently possible, loss of life, injuries and property damage may be drastically reduced. In addition, if earlier detection is simultaneously paired with collection of better information on the spatial location of the fire, and its stage of development, this information can be delivered to emergency first responders. Emergency response planning and actions can then be targeted such that appropriate resources are applied earlier in a fire situation. This will further reduce the potential for loss of life and injury to both occupants and first responders, as well capital losses due to fire. The advent of building monitoring systems affords excellent potential to improve upon current fire detection protocols. Building systems incorporate a large quantity of different sensors for a variety of uses. Currently, most building sensors are focused primarily on the parameters necessary to optimize building efficiency and on intrusion detection, but they are installed at much higher density than standard fire detectors and the density is increasing as greater efficiencies in cost and quicker return on investment can be achieved. While most of these sensors are presently chosen to fulfill building management purposes, there is significant opportunity to integrate some of the existing sensors, or to develop new sensors of similar type, for applications in systems for rapid fire detection, real-time fire monitoring, and potentially fire forecasting. Leveraging building environmental and other sensors for this expanded use, however, requires further knowledge about the characteristics of fires, from ignition to full growth, specifically with regards to those physical characteristics which might be measured by any new fire detection sensor suites. One of the biggest challenges associated with development of new fire detection systems is their associated cost and the reluctance on the part of building owners, insurers, and other parties to invest in detection systems when fire is such a rare event. Thus while there has been research into improved fire detection technology, there has been limited advancement in detection system design. Ultimately, the limiting factors around potential use of building monitoring sensors for this purpose will relate to determination of optimal sensor response to various signals generated by a developing fire and optimal sensor density in terms of cost versus position of sensors relative to potential fire sources. One of the best chances for improved fire detection, as well as potentially for reduced nuisance alarms and enhanced fire monitoring, is to first take advantage of the signals transmitted by building sensors and assess their potential for use in fire detection. Therefore the objectives of this research were to characterize fire and non-fire environments using a range of sensor technologies to determine potential characterization parameters and to evaluate background and nuisance sensor response using the same sensor technologies; to identify candidate sensors and develop an “idealized” sensor block; and finally to develop algorithms for fire state determination. Approximately 125 experiments were performed in a range of environments ranging from a 1m^3 box to full-scale experiments in a two-story structure. Temperature, relative humidity, and luminosity were measured during all experiments, while heat flux and heat release rate were additionally measured during the full-scale experiments. The research shows that fire signals measured using non-fire sensors could be distinguished from background and nuisance signals indicating their potential for use in improved fire state determination. The data collected, in particular with regards to luminosity and relative humidity, has not been previously reported in the literature and thus provides new information that may be leveraged for incipient fire detection and monitoring. Furthermore a novel learning algorithm, hierarchical temporal memory, a real-time continuous learning algorithm yielded promising results for fire state determination. Real-time data streaming of the sensor data paired with the hierarchical temporal memory yielded the ability to rapidly identify fire anomalies.