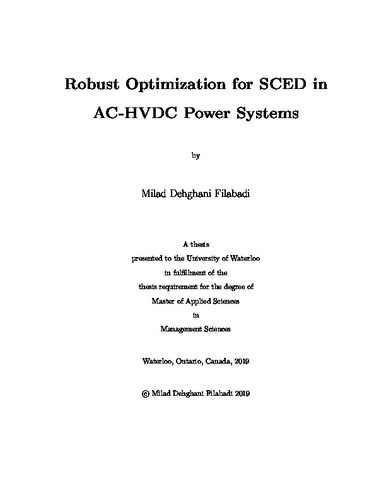 Wind power is a clean, renewable and low-carbon resource for power generation that has received increasing attention in power systems over the last few decades. There are two main challenges associated with the large-scale integration of wind power plants in the power system: i) the intermittent nature of wind power results in prediction errors that can greatly impact the system's operational security and reliability requirements, and ii) large-scale offshore wind farms are typically located far from onshore loads and require new developments in the transmission system of power grids, e.g., realization of mixed alternating current-high voltage direct current (AC-HVDC) power systems, which will introduce new reliability requirements to the system operator. The security-constrained economic dispatch (SCED) problem deals with determining a power dispatch schedule, for all generating units, that minimizes the total operational cost, while taking into account system reliability requirements. Robust optimization (RO) has recently been used to tackle wind power uncertainty in the SCED problem. In the literature of RO, the budget of uncertainty was proposed to adjust the solution conservatism (robustness) such that higher budgets of uncertainty correspond to more conservative solutions. This thesis shows that the budget of uncertainty approach may not be meaningful for problems with RHS uncertainty since increasing the budget of uncertainty by more than a certain threshold may not always impact the level of conservatism. This thesis proposes a new tractable two-stage robust optimization model that effectively incorporates the budget of uncertainty in problems with RHS uncertainty, controls the level of conservatism, and provides meaningful insights on the trade-off between robustness and cost. Furthermore, this thesis examines the applicability of the proposed robust approach for the SCED problem in mixed AC-HVDC power systems with large integration of wind power. The proposed robust SCED model considers the impact of wind power curtailment on the operational cost and reliability requirements of the system. Extensive numerical studies are provided to demonstrate the economic and operational advantages of the proposed robust SCED model in mixed AC-HVDC systems from five aspects: the effectiveness of the budget of uncertainty, robustness against uncertainty, contribution to real-time reliability, cost efficiency, and power transfer controllability.