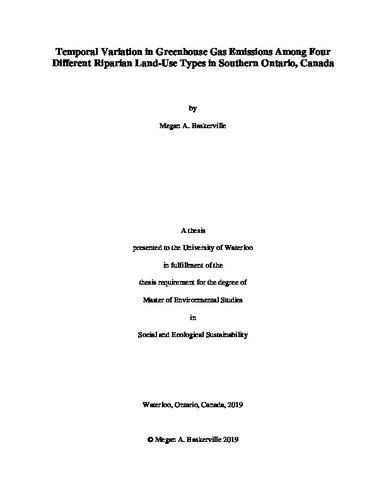 Forested riparian buffers (RBs) provide various environmental services, such as reducing streambank erosion and sedimentation, creating wildlife habitat, enhancing carbon (C) sequestration, enhancing streamside microclimate, and filtering contaminants and pollutants from surface agricultural runoff. However, RBs located downslope of agricultural areas have high water tables, increased nitrogen (N) due to surface runoff, and high C inputs from vegetation, creating a potential hot spot for soil greenhouse gas (GHG) emissions. Despite this concern of RBs as a GHG source, there are few comparative analyses of GHG emissions from different riparian land-use systems (e.g. grassed vs forested) in temperate regions. This information is crucial as it will provide insight into which riparian buffer is the most effective in mitigating GHG emissions, as this has future implications for contributions to climate change. The goal of this study is to quantify and compare temporal trends in soil GHG (CO2, CH4, N2O) emissions, as well as the soil physical and chemical characteristics that influence emissions, from a rehabilitated forest riparian buffer (RH), a grassed riparian buffer (GRS), two undisturbed natural riparian forests (UNFA/B), and an agricultural field (AGR) located in southern Ontario, Canada. Mean soil N2O emissions from the AGR, GRS, RH, UNFA and UNFB sites were 34, 17, 16. 14, and 10 μg N2O-N m-2 h-1, respectively. The mean emissions were consistently higher at the AGR site compared to all the other land-use types, but this relationship was not significant. This trend can likely be explained by the fertilizer treatments added to the soil, contributing sources of N to fuel N2O production. Mean CO2 emissions from the AGR, GRS, RH, UNFA, and UNFB sites were 120, 276, 131, 120, and 117 mg CO2-C m-2 h-1, respectively. The GRS was significantly (p<0.05) higher than all the other land-use types, and this can likely be attributed to the high density of root matter fueling soil respiration. Mean CH4 emissions from the AGR, GRS, RH, UNFA, and UNFB sites were -37, -61, -17, 756, and 55 μg CH4-C m-2 h-1, respectively. The UNFA site was the only site that consistently acted as a CH4 source, and was significantly (p<0.05) higher than all the other sites. For all three GHGs, season did not consistently have a significant (p<0.05) impact on emissions. Soil environmental characteristics (i.e. soil temperature and moisture) were the biggest drivers of GHG emissions at all land-use types, while soil chemical characteristics (SOC, NO3-, NH4+) did not have as large of an impact on GHG emissions. The results of this study are significant, as they show that forested riparian buffers have lower emissions than grassed buffers and agricultural fields. For all the GHGs analyzed, the RH site had similar or lower emissions compared to the other land-use types. Further, soil physical characteristics (soil temperature and moisture) seemed to play the largest role in influencing emissions, rather than the soil chemical characteristics (NO3-, NH4+, SOC). These results are highly dependent on the environmental conditions of the site, including the presence of a tile drainage system, the location of the water table, and the abundance of understory vegetation. Further long-term research (>3 years) should be undertaken to identify GHG emissions under varying environmental conditions (e.g. interannual climate variation).