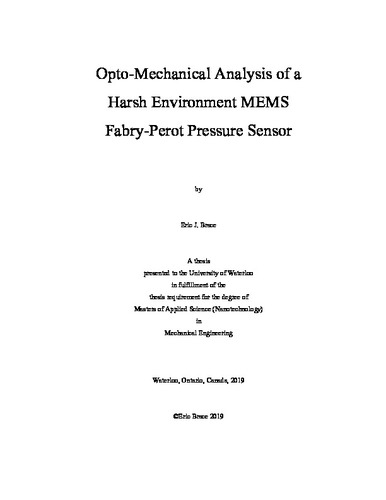 The objective of this thesis is to develop an optically interrogated pressure sensor that is capable of measuring the applied fluid pressure in harsh environments. In its completed state, this sensor is intended be used in plastic injection moulding manufacturing in order to identify the current state of the plastic melt and optimize the process. An extrinsic fiber-optic Fabry-Perot pressure sensor, based on micro-electromechanical system (MEMS) is developed. A series of experiments are designed and carried out to validate the sensor’s applicability for high temperature and pressure environments. Preliminary results are gathered using an existing silicon membrane in order to verify the concept, which was fabricated using anisotropic etching. Silicon on insulator (SOI) multiuser fabrication process is used to produce three designs of silicon membranes through Deep reactive-ion etching (DRIE). These devices are packaged with a stainless steel housing using epoxy to support the die and verify alignment between the fiber and reflective membrane. Once assembled, the Fabry-Perot cavity is formed between the membrane and fiber surface. Experimental results are collected using the proof of concept device for temperature ranges of 20 – 100 °C and gauge pressures from 0 - 1000 PSI, and for the SOI devices at room temperature and gauge pressures from 0 to 3000 PSI. Analysis of this data shows operating pressure ranges of 150 to 2300 PSI, maximum nonlinearity of less than 2.6% and sensitivities between 0.36 and 1.4 nm/PSI. The experimental deflection results are compared against finite element and analytical models to verify the expected response. This is adjusted for temperature effects using predictions of material property temperature-dependence and thermal expansion. In order to examine the impact of fabrication methodology, a fixed-fixed support analytical model is compared to experimental data of the four membrane designs. It is found that the anisotropic etched membrane shows poor agreement with this analytical model, showing 570% greater sensitivity than predicted using the model. Finite element modeling of the system shows significant deformation in the membrane support structure, resulting in this greater sensitivity. A simply supported analytical model is also compared to the data, showing 100% greater sensitivity. This model is adjusted using a least squares procedure to fit the experimental data through modification of the support-defined leading coefficient. A high temperature trial shows reduced sensitivity to pressure, corroborating the predicted finite element behavior. Silicon on insulator DRIE membranes show similar error, on the order of 100%, when compared to the fixed-fixed analytical model. This model is adjusted in a similar manner to fit the experimental data. The findings of this thesis suggest that unaccounted-for deflection is present in the membrane supports of DRIE and anisotropic etched MEMS devices, which significantly impacts sensor response to pressure. This results in higher sensitivity than analytically predicted occurring in the experimental trials of the as-fabricated devices. Future work should be focused on expanding the predictive power of MEMS membranes, stabilization of the optical signal and integration of temperature sensing to expand the capabilities of the device while correcting for real-time thermal aberration.