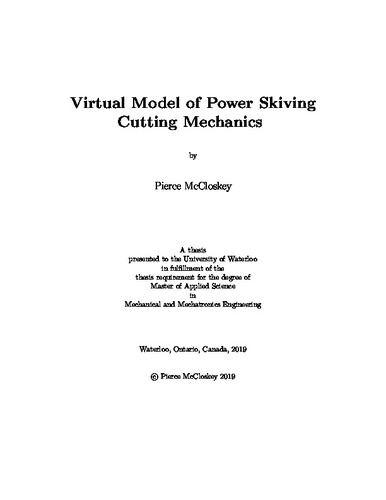 Power skiving is a high-speed gear cutting operation which involves feeding a rotating cutting tool into a synchronously rotating workpiece at an angled orientation, creating a continual chip removal cutting action. It is capable of quickly machining both internal and external gears. The process has recently gained more interest from industry due to its potential to increase the productivity of gear manufacturing. However, power skiving is prone to vibrations and chatter, requiring stiff, well-controlled machine tools for effective implementation. Furthermore, methods for planning power skiving processes have not matured as much as those for more traditional machining processes, such as milling, turning, and drilling, which creates difficulties for its implementation. Mechanistic models to predict cutting forces and other process outcomes have been widely used for traditional machining operations. These models can be invaluable in industry as tools to aid in the planning and optimization of cutting operations in order to maximize quality, minimize tool wear, and to reduce process time, among other measures of performance. The basis of these models is always the accurate prediction of cutting forces. This sort of modelling has not previously been performed for power skiving, and would be a valuable addition to research into the process. The kinematics of power skiving are straightforward, but result in a complex cutting action. A power skiving process consists of multiple passes at set radial depths of cut. The workpiece and tool rotate as a pair of meshing gears, and the tool is fed axially along the width of the gear at a radial cutting depth. The tool is oriented at a cross-axis angle with respect to the workpiece so that the rotational motion results in the cutting edge being fed through the tooth gaps of the gear to remove material. Homogeneous transformation matrices are established to be able to represent points and vectors in a tool, workpiece, or machine coordinate system. A wide range of local cutting conditions occurs due to the relative velocity between the tool and workpiece, which has been calculated. The kinematics of power skiving are modelled and validated by comparing simulated tool positions with axial position data from the controller of a DMG NT5400 DCG mill-turn machine during experimental trials. Cutting force predictions are made by applying the kinematics in a dexel-based cutter-workpiece-engagement engine to extract data representing a 3D uncut chip. The dexel data comprising the chip is then used to create a two-dimensional point cloud by intersecting the dexels and their outer contours with the established tool rake geometry. Delaunay triangulation is used on the point set to create a cross-section of the chip, with a set size threshold eliminating triangles that are unlikely to be part of the geometry. The chip geometry triangles are associated with points along the discretized cutting edge, and an oblique model using the local cutter geometry and relative velocity establishes the local cutting forces, their component directions (tangent, feed, and radial), and cutting angles (rake and inclination). The local cutting forces across the cutting edge are summed to create a total cutting force prediction. During experimental trials, data was captured using a wireless force measurement system and then filtered to reduce the noise. The measured cutting forces are compared to those produced by the model. It is found that predictions are made within 4--10% average RMS error, and 10--15% peak RMS error for cases where the tool geometry and coefficients are well defined. More trials are needed, however, to validate processes with thinner chips as well as helical and internal gears. To reduce the computation time for simulation results, a partial workpiece simulation is used. A workpiece representing a single gear tooth gap is used in the simulation, and the results are processed using superposition to reconstruct the forces for a full cylindrical workpiece. While a 2--3% error was introduced (in numerically stable cases), in large part due to transient effects in the starts and ends of passes. This method reduced the simulation time by around 93%. The partial workpiece is then used to perform a simulation with alternating ramping-in and constant-depth passes on a wide workpiece. The results of this simulation establish a relationship between previous cutting depth, incremental cutting depth, and cutting parameters (in this thesis, the average total cutting force). With these relationships, new power skiving processes are planned by setting target thresholds and determining the incremental cutting depths. Planning was successfully performed to create processes with more consistent forces compared to the traditional planning approach, though more intelligent process limit targets are still being explored.