The social acceptance of energy storage in Canada and the United Kingdom: Media and public framing of an energy transition technology 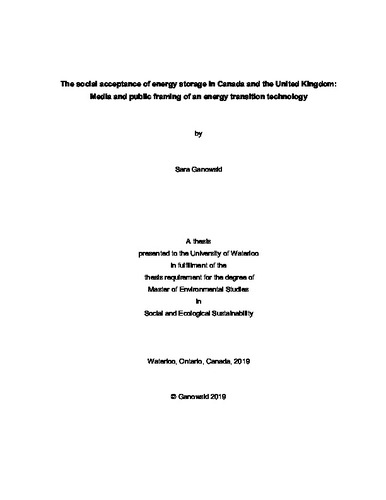 Growing climate and energy security pressures call for more ambitious deployment of transformative low-carbon energy technologies worldwide. By supporting renewable energy integration and evolving power grids, energy storage (ES) technologies (e.g., pumped-hydro, batteries) are expected to help enable improved lower-carbon electricity systems. Yet, commercial deployment to date has been slow and geographically variable largely due to the practical and socio-political barriers in ‘locked-in’ fossil fuel regimes that currently inhibit wide adoption of low-carbon energy solutions. A growing literature suggests that social factors, such as public awareness and acceptance, will have a steering influence on the extent to which ES is deployed at various scales (local, national) as part of an energy transition agenda. News media will play a key role in this process, given the ‘agenda-setting’ influence that framing and issue salience are known to have on actors involved in alternative energy development. However, very little is currently known about these often-overlooked social dynamics in the context of ES, even in jurisdictions where the technology is outpacing incumbent energy policy and regulatory conditions, such as in Canada and the United Kingdom (UK). Further analysis on the social dimensions of ES is needed to help bridge this gap and support effective public communication and deployment strategies for meeting national sustainability and energy security challenges. Taking a sustainability perspective, this thesis compares social perceptions of ES in Canada and the UK, in order to explore the socio-political factors informing the technology’s trajectory in two national settings. Using a comparative, exploratory approach, the project examines: (1) the salience and representation of ES in news media (2008-2017); (2) public awareness and perceptions of ES (2018); and (3) the extent to which media and public perceptions of ES align in both countries (2016-2018). Merging various frameworks for studying energy system change, the thesis comprises a comparative: (1) mixed methods media content analysis of national newspaper coverage on ES (2008-2017; n = 494 articles); and (2) secondary analysis of nationally representative public survey data (2018; n = 2066). The study reveals cross-national differences in media and public perceptions of ES (2016-2018) and explores possible drivers and implications of such variations for ES uptake in the two countries. Overall, ES is found to be favourable in both public spheres, with UK media and survey respondents demonstrating greater attention/awareness, more favourable benefit/risk perceptions, and positive emotional affect towards ES than their Canadian equivalents. Varying frames and narratives, as well as levels of techno-optimism and hype dynamics, suggest that ES is contextualised differently in the two countries in order to appeal to domestic audiences and energy priorities. National socio-political issues and values, as well as certain demographic factors also appear to be linked to varying levels of public acceptance for ES. By exploring how ES is socially constructed in the two countries, the study aims to inspire effective public communication, policy design, and implementation strategies for democratic energy technology deployment as part of a sustainability imperative. The case study thus provides a rich empirical foundation for understanding ES in a socio-political context, while offering practical avenues for supporting its uptake in society as an energy transition tool.

Sara Ganowski (2019). The social acceptance of energy storage in Canada and the United Kingdom: Media and public framing of an energy transition technology. UWSpace. http://hdl.handle.net/10012/14569