Near-field Vortex Dynamics of Flows Emerging from a Rectangular Duct 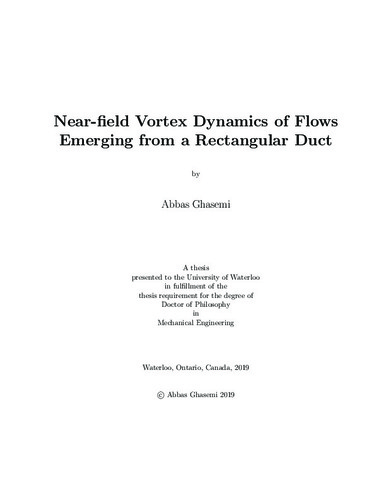 Shear layers and jets have motivated many researches to use experimental, theoretical and numerical methods for the better understanding of the fundamental physics and optimizing the flow characteristics that best suit practical applications such as mixing, heat/mass transfer, reacting flows, cleaning and combustion. Jet flows can be actively controlled using the acoustic forcing, while issuing the jet from non-circular openings can passively optimize the performance. Specifically, the dynamics of the rectangular vortex rings generated within the jet shear layer inspire this thesis for the in-depth experimental/numerical analysis of the underlying physics. The shear layers separated from the longer edge of the rectangular opening at the Reynolds numbers Re_θ0=Uθ0/ν=85-945 are studied using the hot-wire (HW) anemometry and particle image velocimetry (PIV), with a focus on the shear/rotation competition during the initial Kelvin-Helmholtz (KH) roll-ups. Velocity spectra and the spatial linear stability (LST) analysis characterize the fundamental (fn) and its subharmonic (fn/2) mode interacting due to the vortex pairing. For 276 ≤ Re_θ0 ≤ 780, the streamwise turbulence intensity shows a peculiar double-peaking phenomenon, i.e., major and minor peaks of the u_{RMS} coexist towards the high-speed (HS) and the low-speed (LS) sides of the shear layer, respectively. The single/double-peaked u_{RMS} profiles are found correlated with the scattered/organized distribution of the shear/rotation, in demonstrating a transitioning character with the downstream distance, Re_θ0 and the upstream turbulence levels. Excitation at fn increases the vortex count by 21%, advances the location of the first KH roll-up and hence the minor peak formation. Due to the enhanced pairing at the fn/2 forcing, the vortex count reduces by 23%. Before merging into the downstream rotation core, the upstream vortex is shifted towards the HS side and the major peak is accordingly augmented. Actuation advances the transition to the non-linear state, as well as the saturation of the amplification factor. The shearing and rotating loops are found associated with the thinning (elongation) and expansion (accumulation) of the vorticity, respectively. The cross-section of the rectangular jets of aspect ratio 2 at Re=UD_{h}/ν=17,750 deforms into the elliptic/circular shapes in the downstream due to the axis-switching. By enhancing the vortex pairing, excitation at fn/2 shortens the potential core, increases the jet spread rate, and eliminates the overshoot typically observed in the centreline velocity fluctuations. Unlike circular jets, the skewness and kurtosis of the rectangular jets demonstrate elevated anisotropy/intermittency levels before the end of the potential core. The axis-switching location is found variable by the acoustic control of the relative expansion/contraction rates of the shear layers in the top (TV: longer edge), side (SV: shorter edge) and diagonal (DV) views. The curvature-induced velocities are found to reshape the vortex ring by imposing non-linear azimuthal perturbations occurring at shorter wavelengths with time/space evolution. Eventually, the multiple high-curvature/high-velocity regions merge into a single mode distribution. In the TV plane, the self-induced velocity distribution evolves symmetrically while the tilted ring results in the asymmetry of the azimuthal perturbations in SV as the side closer to the acoustic source rolls up in more upstream locations. Large eddy simulations (LES) of the isolated rectangular vortex rings at Reynolds numbers Re_{i}= UD_{h}/ν=355, 877.5, 1775, 8775, 17750$ (i=1,...,5) reveal the differences between their axis-switching and that of rectangular jets. At increased viscous effects, the rotational content of the vortices diffuse and grow in size. The high curvature corners of the rectangular vortex rings induce additional velocities which distort the topology until it appears to be rotated for 90^{o}, the so-called axis-switching phenomenon. Strong viscous effects (Re_{1}) diffuse the ring before the switching is completed while reduced viscous effects allow for the first (Re_{2}, Re_{3}) and second (Re_{4}, Re_{5}) switching. For Re_{2} and Re_{3}, the rotated rectangular rings bifurcate into the pair of semi-circular topologies. Space-time mapping of the instantaneous streamwise velocity at the vortex ring axis reveals strong correlation spots for the occurrence of each axis-switching. Trajectories of the vortex cores in two orthogonal planes demonstrate contractions/expansions conforming to the Sine/Cosine waves associated with the varicose instability modes. The pair of orthogonal varicose modes interact with the phase lagging/leading equal to the quarter of a full cycle which is interestingly equal to the axis-switching frequency. Cross-sectional reshaping of the trailing shear layer in transitioning/starting rectangular jets is similar to that of steady jets while the axis-switching of the leading vortex ring is similar to the isolated rings. Dynamics of the leading vortex ring dominate the entrainment that are not significantly affected by inlet forcing. On the other hand, the near-field entrainment within the trailing vortex rings is promoted proportional to the amplitude of the controlled inlet oscillations.