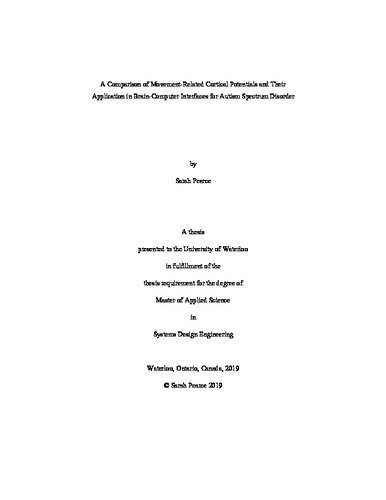 Brain-computer interfaces have the potential to improve the lives of many populations who benefit from neurofeedback. Autism Spectrum Disorder is a condition experienced by many and its deficits are potentially improved for some using brain-computer interface technology. Various techniques have already been used to illustrate improvements in ASD across different brain signals and interactive interfaces. In particular, movement-related cortical potentials are related to executive functioning of movement and have been shown to be successful in other systems. This thesis investigates the effect of Autism Spectrum Disorder in adults on how movement-related cortical potentials are elicited in the brain compared to neurotypical populations to determine whether the motor systems that elicit such signals are abnormally functioning, and as a result whether they may be improved with neurofeedback. In addition to understanding the EEG response for people with ASD to brain-computer interfaces, it is important to gain insights into their perception of such technologies. This thesis also examines how people with ASD perceive different potential brain-computer interfaces. Quantitative and qualitative data was collected and analysed across three different interfaces (auditory, visual, and haptic) and two different tasks (real movement and imagined movement execution). The EEG results show statistically significant differences in the elicitation of movement-related cortical potentials (MRCPs) between the autistic and neurotypical group, thus indicating possible underlying abnormalities in the motor systems being activated. The features of MRCP were much smaller in amplitude in the ASD group, suggesting that fewer neurons are being recruited for movement-based actions. Since other studies have demonstrated success when improving MRCPs in populations suffering from Parkinson’s and stroke, it is thus inferred that such neurofeedback may also benefit those with Autism Spectrum Disorder. While there were no statistical differences regarding EEG-related performance for different modalities, qualitative results suggest common themes regarding people with ASD’s subjective perceptions, including the need for feedback on performance and strong preferences for different types of modalities. These results emphasize the importance of considering both quantitative and qualitative data when designing brain-computer interfaces for these populations. This research demonstrates an opportunity to use MRCP-based neurofeedback to help populations with ASD, as well as emphasizes the importance and insights of capturing qualitative data in the process.

Sarah Pearce (2019). A Comparison of Movement-Related Cortical Potentials and Their Application in Brain-Computer Interfaces for Autism Spectrum Disorder. UWSpace. http://hdl.handle.net/10012/14548