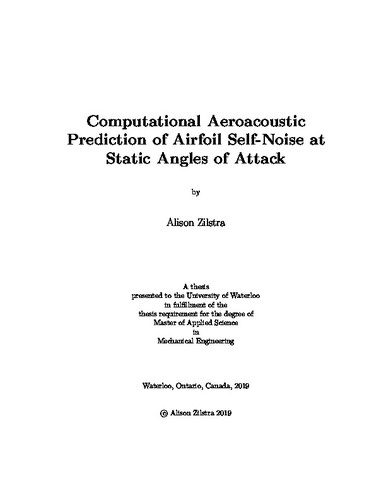 Aeroacoustic noise from wind turbines is often an obstacle in the implementation of wind farms. Reduction of this noise is key to allowing the expansion of the wind energy sector which is crucial for decreasing the dependence on fossil fuel energy sources. The use of a fully analytical computational model for aeroacoustic noise will allow for acoustics to be incorporated into the design stage of new wind turbine technologies. This thesis investigates the use of a predictive model for the noise from two dimensional (2D) blade segments using computational fluid dynamics (CFD). The simulation uses Reynolds Averaged Navier-Stokes (RANS) to initialize the simulation, and then a combination of Large Eddy Simulation (LES) and the Ffowcs-Williams and Hawkings (FW-H) acoustic analogy to predict the flow and acoustics, respectively. The SD 7037 and NACA 0012 airfoils were simulated and compared against experimental flow and acoustics data. The SD 7037 airfoil was tested using incompressible and compressible LES simulation for a Reynolds number of Re=4.25×10⁴. The results show good prediction of both the flow and acoustics, and the source of the tonal noise generated by the airfoil at 0° angle of attack (AOA) was determined to be a result of 2D boundary layer behaviour, and also the transition from 2D to 3D behaviour. The 1° AOA results did not predict the tonal noise found in experiments, but it was determined that inaccuracies in some of the simulations caused the boundary layer behaviour to falsely change to that of the experimental 2° or 3° AOA. The NACA 0012 airfoil was tested using incompressible LES for a high Re case of Re=1.5×10⁶. The flow simulation for this case was good, however the acoustic prediction was at a higher sound pressure level (SPL) than the experimental data. The second case of this simulation predicted tonal noise when experiments predicted broadband noise only. The simulation of this false tonal noise was attributed to instabilities in the simulation. The differences between the SD 7037 1° results, where instabilities caused no tones to be simulated, and the NACA 0012 results for the second case, where instabilities caused false tones to be predicted, shows that care must be taken in the setup of the simulation. Recommendations for future work are to perform a grid independence study and sensitivity analysis to determine the cause of these false predictions. That being said, overall, the predictive abilities of the computational aeroacoustic model result in good prediction of the airfoil self-noise for static AOAs.