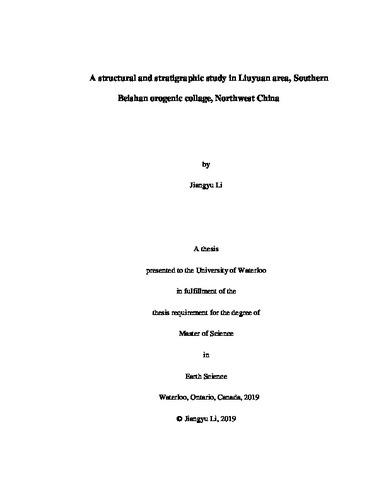 A stratigraphic and structural study of the Permian North Shuangbaotang Complex offers new evidence constraining the timing of the final closure of the Paleo-Asian Ocean to the late Permian. The fold and thrust belt of turbidite sequence in the North Shuangbaotang Complex is interpreted as a syn-tectonic sedimentary deposit in a retro-foreland basin on the upper plate recording the termination of the final stage of accretionary orogenesis in the Beishan orogenic collage. A reconstruction of stratigraphy and structural analysis in this study identified that the North Shuangbaotang Complex is composed of two fault- bounded sedimentary packages and one cover package, which are subjected by two phases of deformations. Package 1 is considered as a part of an accretionary wedge derived from the Liuyuan Complex and package 2 is a part of a forearc basin derived from the Dundunshan terrane. The northward subduction of the oceanic crust and early collision between the Dundunshan terrane and the Dunhuang terrane led to D1 deformation characterized by southwesterly thrusting. The continuous collision thickened the orogenic wedge and promoted the uplift-driven erosion of packages 1 and 2. Hence a syn-tectonic foreland basin formed and unconformably overlied imbricated packages 1 and 2. D2 deformation is represented by the north-verging fold and thrust belt in the retro-foreland basin and constrains the final stage of shortening in the southern Beishan orogenic collage to late Permian.