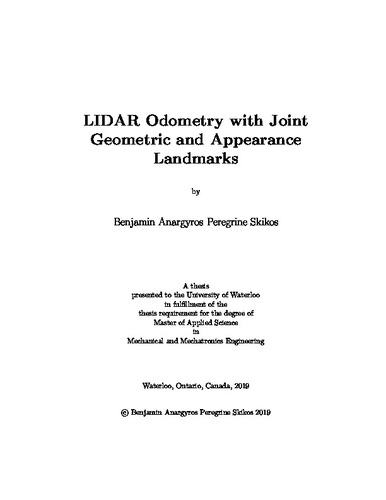 Odometry is the problem of estimating the motion of a moving platform relative to its environment without measurements to a fixed reference point. This is a critical problem for mobile robotics applications where measurements to a fixed reference point are not always assured, such as self-driving cars operating in GPS-denied environments and with physical landmarks potentially obscured by other traffic. Even when a fixed reference is available, motion estimates still improve position estimates by constraining the change in position over short timescales. A fundamental limitation of odometry is that assuming some non-zero error, the path produced by integrating odometry will always diverge from the true path. The rate of divergence depends on the ego-motion and the environment. Aggressive motions such as rapid rotation or high acceleration are likely to cause greater error because they are more difficult to model compared to more sedate motions. Odometry that functions by comparing consecutive sensor samples to determine motion can exhibit greater drift due to high velocity because high velocity reduces the overlap between sensor samples. Lastly, unstructured portions of the scene may not contain useful information to fully constrain the ego-motion. A good example is moving next to a flat featureless wall since observations of that wall only constrain perpendicular motion. In mobile robotics, both camera and lidar are commonly used for odometry. Lidar is a sensor technology that measures the time of flight of laser pulses to collect range-bearing samples from the scene. Lidars are used instead of cameras for certain applications despite their relatively high cost because lidars are not affected by ambient lighting conditions; they do not suffer from glare, or have to trade-off motion blur and sensitivity in low- light conditions. An ancillary benefit of using lidar is that the direct range measurement capability of lidar removes complexity from the odometry algorithm because the distance of sampled points does not have to be estimated from multiple sensor measurements. Lidar odometry algorithms already exist yet there are opportunities for improvement. The intensity information collected by lidar commonly goes unused, with few of the top- performing lidar odometry algorithms on the Kitti odometry dataset leveraging it. As- suming that scenes lacking both geometric and appearance information are less likely than those lacking only geometric information, then a lidar odometry algorithm that leverages both types of information will be more robust than an algorithm that relies only on one type, all other things being equal. Robustness is desirable because it makes performance predictable. The main contribution in this thesis is a lidar odometry algorithm that uses both appearance-based intensity landmarks as well as geometric landmarks to model the scene. The intensity landmarks are gradient edges that model features in the environment such as lane markings while the geometric features are geometric edges and planes. Feature points are selected from multiple lidar scans and matched to the landmarks. The landmarks and the trajectory are jointly optimized within a sliding window filter. The addition of intensity landmarks improves performance in most cases compared to using geometric only landmarks. Evaluation is carried out using the Kitti odometry metric on the Kitti odometry dataset as well as a dataset collected in Waterloo Ontario. Average drift on the Kitti training set was 4.6-9.6 deg/km and 0.71%-2.8% translation drift. Average drift on the Waterloo dataset was 3.1-3.4 deg/km and 1.1%-1.2% translation drift. Compared to a baseline con- figuration using only geometric landmarks, adding appearance-based landmarks produced a slight performance improvement on average across the Kitti subsequences as well as the Waterloo dataset, with up to a 13% reduction on translation error and a 6% reduction of rotation error for specific subsequences. However, there are also subsequences that ex- hibited worse performance with the addition of appearance-based features. In conclusion, the evaluation shows that the addition of appearance information can lead to better per- formance and that the method presented would benefit from additional work on further developing the scene appearance model and how it is applied.