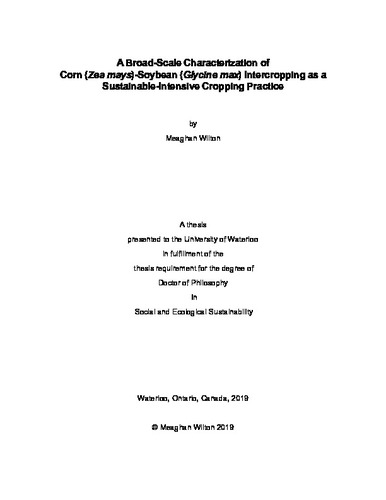 Sustainable-intensification (SI) is known as a strategy to enhance agriculture productivity, while minimizing negative impacts on the environment, and promoting social benefits. The SI concept broadened over the years to cover a wide range of agriculture systems and sustainability issues. Recently, literature reviews revealed that SI research has often failed to address all aspects of the SI concept, specifically social, economic and political dimensions. Influenced by previous SI literature, this dissertation presents original research for conducting interdisciplinary broad-scale SI research. A mixed-method approach influenced by Farming System Research was used, to determine whether modernized corn-soybean intercropping was a suitable SI cropping practice for the southeast Buenos Aires (SEBA) region of the Argentine Pampas. Corn-soybean intercropping was assessed through the incorporation of four studies that each differed in scale, scope and methodology. These studies consisted of the following: i) the socio-ecological regional context; ii) soil greenhouse gas (GHG) emissions derived from corn-soybean intercropping; iii) perspectives from social actors on the adoptability of intercropping in the SEBA region; and iv) an interdisciplinary study that developed a SI framework to characterize and evaluate corn-soybean intercropping for regional suitability. Studying the socio-ecological context of the SEBA region provided a historical perspective and gave the context of the larger system that the Argentine Pampas production systems are nested within. Identified past events affected regional and field-level decision-making, which impacted novel cropping practice development and implementation. Argentine agriculture policies have frequently changed to meet political platforms, and to regulate social welfare and federal debts. These changes influenced agriculture activities and evolved the Pampean agriculture regime towards modernization and intensification. The use of intensive agricultural practices throughout the Pampas contributed to an array of environmental issues. In response, agriculture researchers studied corn-soybean intercropping as a strategy to increase production and reduce environmental degradation. One environmental concern that many SI researchers discussed in literature was GHG mitigation. In this dissertation, a greenhouse gas study was performed within the SEBA region at the field scale. The natural science study focused on quantifying, comparing and evaluating carbon dioxide (CO2) and nitrous oxide (N2O) soil-surface emissions ̶ obtained weekly from static chambers in field treatments for two growing seasons. The four field treatments examined were two configurations of substitutive corn-soybean intercropping (1:2 and 2:3 configurations) and two corresponding sole crops. CO2 emissions from the treatments ranged from 3.6 to 86.5 kg CO2-C ha-1 d-1, and did not significantly differ between treatments for both growing seasons. The 2:3 intercropping treatment had N2O emissions that were not significantly different from sole crops, ranging from -6.1 to 158.4 g N2O-N ha-1 d-1. The 1:2 intercropping treatment had significantly greater N2O emissions (ranging from -5.7 to 170.1 g N2O-N ha-1 d-1) compared to the other treatments. During the first growing season (January 2012 - May 2012), the 1:2 intercropping treatment had mean N2O emissions that was significantly greater (p <0.001; 10.5 ± 1.08 g N2O-N ha-1 d-1± SE) than the means of other three treatments (5.4 ± 0.74 g N2O-N ha-1 d-1). In the second growing season (December 2012 - May 2013), the 1:2 intercropping treatment mean (12.0 ± 1.80 g N2O-N ha-1 d-1) was significantly greater (p=0.035) than the sole corn mean (6.3 ± 1.43 g N2O-N ha-1 d-1). An intercropping GHG interpretative (IGI) calculation was developed to evaluate the mitigation potential of intercropping systems in comparison to growing two corresponding crops as sole crops. The IGI values showed that the 2:3 intercropping treatment had greater mitigation potential than the 1:2 intercropping treatment. At the regional scale, producer and agricultural practitioner perspectives were utilized in an inductive social science study, to determine the adoptability of corn-soybean intercropping as an emerging modernized cropping practice within the SEBA region. Semi-structured interviews with crop producers and unstructured interviews with agricultural practitioners provided insight on cultural, technical, economic, and political factors that affect the real-world logistics of the intercropping practice. Interviews revealed that the intercropping practice had poor adoptability for producers due to: i) national socio-political policies and circumstances; ii) the inability to compete with economic and labour advantages of growing soybean as a sole crop; and iii) the region’s cool climate limited production. A cross-scale broad-scope framework was developed to characterize corn-soybean intercropping holistically. The framework had a bottom-up structure that differentiated sustainability and intensification components of the cropping practice through indicators, subcategories and categories. SEBA corn-soybean intercropping was characterized as having both sustainability and intensification features, but was a weak representation of SI. Corn-soybean intercropping displayed features within the diversity and complexity category for the sustainability theme, and features within the increased production category for the intensification theme. Results in the short-term economic and socio-political categories impacted corn-soybean intercropping adoptability in the region; these two categories are often underutilized in SI research, yet were revealed to be of great importance within this embedded designed case study. Research gaps were presented in the chemical input mitigation and knowledge intensity categories. Continuing research in these two categories is recommended to strengthen the representation of corn-soybean intercropping as a SI cropping practice.