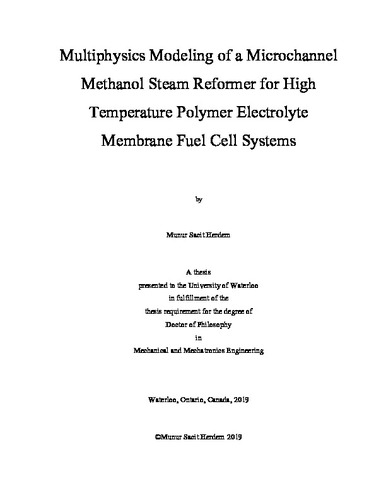 One of the main challenges facing power generation by fuel cells is the difficulties of hydrogen fuel storage. Several methods have been suggested and studied by researchers to overcome this problem. Among these methods, using a fuel reformer as one of the components of the fuel cell system is considered a practical and promising alternative to hydrogen storage. Among many hydrogen carrier fuels that can be used in reformers, methanol is one of the most attractive due to its distinctive properties. Methanol reformate gas is ideal for feeding high temperature polymer electrolyte membrane fuel cells (HT-PEMFCs). Therefore, methanol reformate gas fueled HT-PEMFC systems are currently available in the market for portable, stationary and marine applications. Although there are various reformer types to convert methanol to hydrogen rich syn-gas, microchannel plate heat exchanger reformers have some advantages that increase the system efficiency and decrease the system size. In particular, the microchannel plate heat exchanger methanol reformer can be a promising candidate to meet size demands and improve the system efficiency and start-up time to produce power in the range of 100 to 500 W for auxiliary unit power (APU) applications. Furthermore, recent improvements in new catalyst types for methanol reforming can enable the next generation of microchannel methanol reformers with less weight and higher efficiency to be designed. Modeling of the microchannel reformers can be helpful to design next generation reformers. In this thesis, firstly, a methanol reformer system to produce power using HT-PEMFC for portable power generation applications is studied. This study is required for selecting inlet parameters for the multiphysics modeling of the microchannel methanol steam reformer in the second and the third studies. In this study, a detailed parametric study using computer simulations is conducted to estimate the effects of steam-to-carbon (SC) ratio, reformer temperature, current density of the fuel cell, fuel cell temperature, cathode stoichiometric ratio, hydrogen utilization, and rate of power production on the reformate gas composition, fuel cell performance, input fuel flow rate, and heat duties of the system components. In particular, the effects of the reformate gas composition at various fuel cell temperatures on HT-PEMFC performance were examined. The results confirm that the CO molar ratio in the reformate gas increases by decreasing the SC ratio and increasing the reformer temperature. However, the adverse effect of CO molar ratio on fuel cell performance decreases at elevated fuel cell temperatures. The fuel cell voltage decreases by ͠ 78% with the variation of the current density from 0.1 A/cm₂ to 1 A/cm₂ for 160°C fuel cell temperature and 0.9% CO molar ratio in the reformate gas, while it decreases by ͠ 61% for 180°C fuel cell temperature. In addition, an increase in the fuel cell temperature from 160°C to 180°C, the input fuel flow rate to produce a given power generation from the system decreases, while enough heat is still available in the system to provide the heat requirement of different system components. In the second study, a steady state multiphysics model of a microchannel methanol reformer for hydrogen production is developed and validated for the purpose of studying the effects of catalyst layer structural parameters and heat supply strategies on the reformer performance. The aim of this study is to generate hydrogen from the reformer that can be used in HT-PEMFCs. The dimensions of the reformer and inlet flow rate of methanol are selected to produce enough hydrogen to feed fuel cells in the range of 100 to 500 W. This study considers a 2-dimensional domain for the thin coating of the reforming catalyst to account for the internal diffusion limitations and the coating layer structural parameters. The multicomponent Maxwell-Stefan diffusion equation is implemented to account for diffusion fluxes inside the porous structure of the catalyst. The multiphysics model is validated using the reported experimental data by implementing four different reaction kinetics models of methanol steam reforming. This study considers the best fit kinetics model to evaluate the performance of the microchannel methanol reformer. The results show that the catalyst effectiveness factor is relatively low only at the entrance of the reformer for a catalyst layer thickness greater than 50 µm. In addition, this study reveals that for efficient use of the catalyst, the effective heat supply strategy should be improved. Additionally, the design feasibility of the segmented catalyst layer to achieve a certain amount of methanol conversion with less catalyst is demonstrated. It is revealed that for the same inlet conditions, the segmented catalyst layer design required 25% less reforming catalyst to achieve 90% conversion compared to the conventional continuous coating design. In the last study, a numerical model is developed to predict the performance of a microchannel methanol steam reformer with different catalyst layer configurations to produce hydrogen-rich syngas for a HT-PEMFC. A solution schema is developed to compare continuous catalyst layer configurations and various segmented catalyst layer configurations without any convergence issue in the numerical analysis. In this work, heat is provided to the endothermic reforming-side via methanol combustion. The results show that higher heat transfer rates can be provided by applying segmented catalyst layer configurations, thus resulting in significant performance improvement of the microchannel methanol steam reformer. The results reveal that methanol conversion can be increased by ͠ 25% by using segmented catalyst layer configurations with less catalyst in the reforming and combustion sides. The results also indicate that even though there is no significant improvement in methanol conversion with increasing catalyst layer thickness, the greater catalyst layer thickness provides the advantage of reduced high temperature elevations across the reformer length. Overall, the segmented catalyst layer configurations can play an important role in designing the next generation of microchannel reformers for fuel cell power generation systems to maximize power, minimize reformer size, and decrease the required quantity of catalyst.