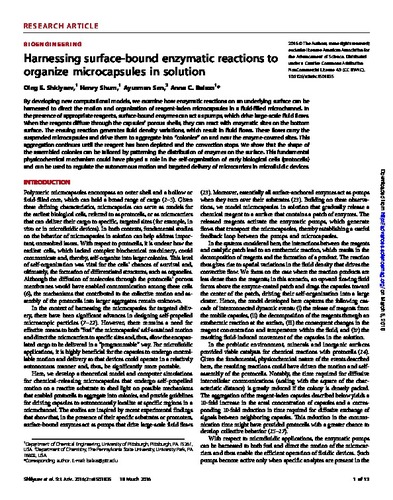 By developing new computational models, we examine how enzymatic reactions on an underlying surface can be harnessed to direct the motion and organization of reagent-laden microcapsules in a fluid-filled microchannel. In the presence of appropriate reagents, surface-bound enzymes can act as pumps, which drive large-scale fluid flows. When the reagents diffuse through the capsules' porous shells, they can react with enzymatic sites on the bottom surface. The ensuing reaction generates fluid density variations, which result in fluid flows. These flows carry the suspended microcapsules and drive them to aggregate into "colonies" on and near the enzyme-covered sites. This aggregation continues until the reagent has been depleted and the convection stops. We show that the shape of the assembled colonies can be tailored by patterning the distribution of enzymes on the surface. This fundamental physicochemical mechanism could have played a role in the self-organization of early biological cells (protocells) and can be used to regulate the autonomous motion and targeted delivery of microcarriers in microfluidic devices.

Except where otherwise noted, this item's license is described as https://creativecommons.org/licenses/by-nc/4.0/