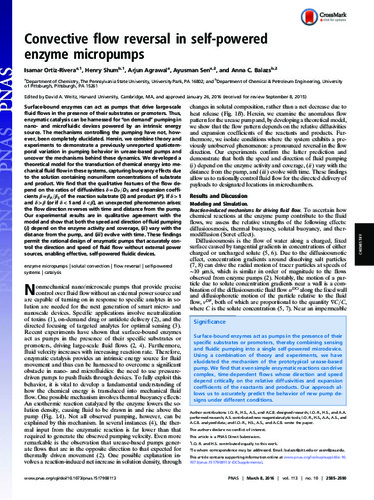 Surface-bound enzymes can act as pumps that drive large-scale fluid flows in the presence of their substrates or promoters. Thus, enzymatic catalysis can be harnessed for "on demand" pumping in nano-and microfluidic devices powered by an intrinsic energy source. The mechanisms controlling the pumping have not, however, been completely elucidated. Herein, we combine theory and experiments to demonstrate a previously unreported spatiotemporal variation in pumping behavior in urease-based pumps and uncover the mechanisms behind these dynamics. We developed a theoretical model for the transduction of chemical energy into mechanical fluid flow in these systems, capturing buoyancy effects due to the solution containing nonuniform concentrations of substrate and product. We find that the qualitative features of the flow depend on the ratios of diffusivities delta = D-P / D-S and expansion coefficients beta = beta(P) / beta(S) of the reaction substrate (S) and product (P). If delta > 1 and delta > beta (or if delta < 1 and delta < beta), an unexpected phenomenon arises: the flow direction reverses with time and distance from the pump. Our experimental results are in qualitative agreement with the model and show that both the speed and direction of fluid pumping (i) depend on the enzyme activity and coverage, (ii) vary with the distance from the pump, and (iii) evolve with time. These findings permit the rational design of enzymatic pumps that accurately control the direction and speed of fluid flow without external power sources, enabling effective, self-powered fluidic devices.

Except where otherwise noted, this item's license is described as https://creativecommons.org/licenses/by-nc-nd/4.0/