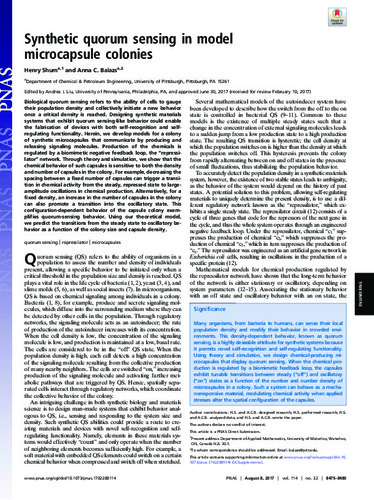 Biological quorum sensing refers to the ability of cells to gauge their population density and collectively initiate a new behavior once a critical density is reached. Designing synthetic materials systems that exhibit quorum sensing-like behavior could enable the fabrication of devices with both self-recognition and self-regulating functionality. Herein, we develop models for a colony of synthetic microcapsules that communicate by producing and releasing signaling molecules. Production of the chemicals is regulated by a biomimetic negative feedback loop, the "repressilator" network. Through theory and simulation, we show that the chemical behavior of such capsules is sensitive to both the density and number of capsules in the colony. For example, decreasing the spacing between a fixed number of capsules can trigger a transition in chemical activity from the steady, repressed state to large-amplitude oscillations in chemical production. Alternatively, for a fixed density, an increase in the number of capsules in the colony can also promote a transition into the oscillatory state. This configuration-dependent behavior of the capsule colony exemplifies quorum-sensing behavior. Using our theoretical model, we predict the transitions from the steady state to oscillatory behavior as a function of the colony size and capsule density.

Except where otherwise noted, this item's license is described as https://creativecommons.org/licenses/by-nc-nd/4.0/